It was during today’s evening that the teams for the imminent Test against Afghanistan and the limited-overs leg of the England tour were to be selected. The eyes of the cricket loving fans were on the selectors for both the teams were expected to rest some big names and also contain some new names.

Virat Kohli, India’s Test captain, will miss the match against Afghanistan next month as he will board the plane to fulfil his county commitments. The selectors dropped Rohit Sharma from the Test squad whereas Jasprit Bumrah and Bhuvneshwar Kumar were rested.

There were talks of selectors giving many new faces a go for this Test but that didn’t happen as most of the regular members of the Test team were included in the squad.

As far as the limited overs squad were concerned, Siddarth Kaul was named in both the squads after his consistent performances in the IPL. Another interesting inclusion was of Lokesh Rahul and Ambati Rayudu, two names who have been amongst the runs in this season of the IPL.

Even Washington Sundar and Umesh Yadav got the nod in the both the sides. Amongst the people who are dropped from the team are Ajinkya Rahane (ODIs), Manish Pandey (ODIs), Mohammad Shami (ODIs), Shardul Thakur (ODIs & T20Is), Axar Patel (ODIs & T20Is) and Jaydev Unadkar (T20Is).

One name whose inclusion in the T20I side didn’t generate talks in the affirmative was Manish Pandey. Most people have disliked this option due to his current form in the IPL, which is not overwhelming. In the 10 matches that he has played so far, he has scored 184 runs at an average of 23 and a strike rate of 112.19. However, what people are not realising is that he was India’s third-highest run-scorer in their previous assignment, Nidahas Trophy, and second-highest run-scorer in the format in South Africa.

I think he had a case to get in over Manish Pandey, surely?#TeamIndia #Cricket #ENGvIND

Indian Cricket Fans After Knowing Manish Pandey has been Selevted For the Indian T20Squad Against England ! pic.twitter.com/LEoKHoq9S4

Come to me with an explanation somebody. I am struggling to find one.

why the hell, manish pandey was getting selected again and again :/

Manish Pandey despite of very poor IPL & No Suryakumar Yadav & Ambati Raydu despite of such a great IPL performance, very very poor selection in this.

No Rishabh Pant, No Iyer
But Manish Pandey and Raina get selected even after poor performance.😡😡#Politics 👎👎

why is ambati rayudu not in T20 squad?

what special has manish pandey done so far in the ipl?

How many more chAnces Manish Pandey needs…he has been poor for @SunRisers too! 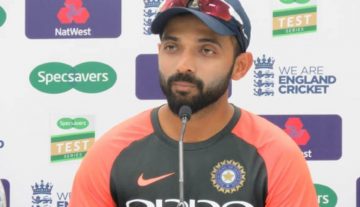