India’s young wicketkeeper-batsman Rishabh Pant got trolled by the Twitterati after posting a picture with another youngster Prithvi Shaw.

As both have made their international cricket debut in this year, Pant has played five Tests, three ODIs and nine T20Is. Meanwhile, Shaw has played only two Tests during the recent home Test series against Windies.

In the very early stage of their international career, both have impressed with their performances. However, recently, during the first T20I between Australia and India at Brisbane on last Wednesday (November 21), Pant disappointed hugely with his immature batting.

Initially, Pant started very well and provided a crucial and quick 51-run partnership with Dinesh Karthik for the fifth wicket that brought them to close of the victory. But in the very deciding moment, Pant (20 runs off 16 balls) was caught out at the point after playing an immature shot. Many experts, even the Indian skipper Virat Kohli also believes that Pant’s dismissal took the game away from them.

Just before the third and final T20I of the series against the hosts Australia at Sydney, which is a must-win game for India to save the series, Pant posted a picture with Prithvi Shaw on his official Twitter account and wrote, “My brother has the coolest brother… just saying. @PrithviShaw”

My brother has the coolest brother… just saying 😂😎@PrithviShaw pic.twitter.com/vCw6VH1VW3

However, some fans didn’t enjoy this post as they have felt that Pant should pay more attention to his cricketing skills.

Thoda game p dheyan do we lost 1st match coz of u only ….

Concentrate on your game. You played a horrible cricket shot in Brisbane and poor wicket keeping in Melbourne. Photos and selfies don’t make you great

Please concentrate on your game brother..

Pls practice for your next match I want your 50 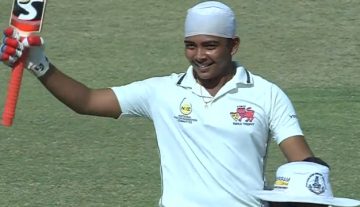