The veteran Indian fast bowler, Umesh Yadav will be undergoing a fitness test soon before the start of the 3rd Test match between India and England scheduled to be commencing on February 24 in Ahmedabad. Umesh is likely to be the only change in India’s Test playing XI for the next match starting in Ahmedabad on Feb. 24 apart from Jasprit Bumrah.

Describing the same, a senior BCCI official during a chat with PTI said, “Umesh’s fitness test will happen in a couple of days time. Look, it doesn’t matter if the ball is red or pink. If you keep a dry wicket, the ball will turn and extra lacquer won’t be of any consequence. However, if there is dew then obviously the ball will start skidding and it might just be good for batting. So that can’t be discounted.”

ALSO READ: Virat Kohli Shares A Glimpse OF His PreparatIon For The Pink-ball Test

Umesh Yadav, who was bought back by the Delhi Capitals in the IPL Auction on Thursday, will be back in action with the Delhi-based franchise will be back with the franchise he started his Indian Premier League career with this year after being bought by them at his base price of ₹1 crore on February 18.

The fiery Indian pacer has played for various franchises like Delhi Capitals (Delhi Daredevils then), Kolkata Knight Riders (KKR), and RCB in the cash-rich T20 tournament. He made his debut against Chennai Super Kings (CSK) in 2010. In his 121 IPL matches, Umesh Yadav has scalped 119 wickets at an economy of 8.51 and an average of 30.08.

ALSO READ: Cricketing Fraternity In Awe OF Humongousness Of The Motera Stadium

The Vidarbha fast bowler has been out of action ever since he suffered a calf injury during the Boxing Day Test against Australia. On Wednesday, BCCI said that Umesh has been added to the squad as a replacement of Shardul Thakur for the last 2 Test matches against England in England but only after assessment of his fitness Test. 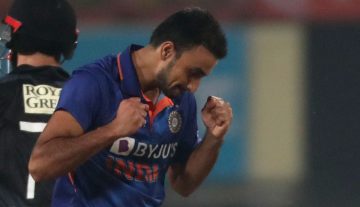