The second day of the ongoing third Test between England and India was a tiring one for the visiting bowlers at Headingley. England piled on the misery thanks to their Joe Root who smashed his third century of the series. The hosts currently have a huge lead close to 350 runs with two wickets still in hand. During the day’s play, the young Indian wicket-keeper batsman,  Rishabh Pant, and the skipper Virat Kohli were seen having a chat with both the on-field umpires.

Before the start of the third session, the on-filed umpires, Alex Wharf and Richard Kettleborough asked Rishabh Pant to remove the tapes on his wicketkeeping gloves. His fourth and fifth fingers were taped which is not correct according to the MCC laws.

Law 27.2 designed for gloves states as follows, ” If, as permitted under 27.1, the wicketkeeper wears gloves, they shall have no webbing between the fingers except joining index finger and thumb, where webbing may be inserted as a means of support”

Interestingly, the umpires made their move after Dawid Malan was dismissed caught behind the wickets off the last ball before Tea and soon after walking out on the field, they got the tapes remove from Rishabh Pant’s gloves. At the same time, the commentators on air, Nasser Hussain and David Lloyd gave the clarification regarding the laws for the gloves suggest one can’t tape the way Pant did.

Nasser Hussain said, “There’s lots in the laws of the game about the webbing, but we’re hearing from the third umpire, Richard Illingworth, that he wasn’t allowed and he’s not allowed to tape his gloves like that, so they’ve asked him to take that tape off.”

ALSO READ: Dawid Malan Considers Joe Root As One Of The All-Time Greats

Further Lloyd argued that Dawid Malan’s dismissal was illegal and he should’ve been recalled. However, Nasser Hussain reckoned that tapes had been there right through the series and not only for this match.

Here’s the video of the same: 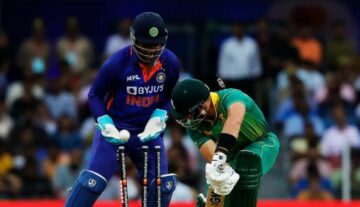