Former first-class cricketer and coach Vasoo Paranjape has passed away on Monday. Born in Gujrat, he was 82 and had played 29 first-class matches for Mumbai and Baroda. He is well-known for shaping the careers of Sunil Gavaskar and several other Indian greats.

He was a coach at the National Cricket Academy (NCA) and was the father of former Indian players Jatin Paranjape, who played four One-Day Internationals for India in 1998.

Paranjape, in his first-class career, scored 785 runs at an average of 23.78 and picked up nine wickets. His highest first-class score of 127 came against Baroda in the 1964-65 Ranji season. But more significantly, he mentored and coached several other prominent cricketers emerging from the city, including Sunil Gavaskar, Dilip Vengsarkar and Rohit Sharma, among others.

As soon as the news of his demise came out, the Indian cricketing fraternity went into the state of shock. Cricketers of yesteryear and mainly Mumbai-based cricketers expressed their sadness at the passing away of Paranjape.

Really sad to hear about Vasoo Paranjape ji. My deepest condolences and may his soul rest in peace. 🙏

Really saddened at the demise of Vasoo Paranjape. He was an institution in the game with a real positive vibe in whatever he did. Condolences to @jats72 and the family. God bless his soul 🙏🏻 pic.twitter.com/LlIkaB242Q

Saddened to hear the passing of Vasu Paranjape. Two years of my formative years at the National camp was a great learning under his tutelage. He will be missed. My condolences to @jats72 and family. 🙏🏽

Our game is poorer today. #VasuParanjape was a pure cricket lover who gave freely. He romanced the game and in his company, we did too. Jatin, his stories will regale us for years and we will always remember your father with a smile.

The cricket story of the day is that cricket has lost one of its greatest story-tellers in Vasoo Paranjape. Thoughts and prayers with @jats72 and family

Have not been able to compose a tweet today without breaking into tears, but I must.
Goodbye Vasoo Paranjape sir.
Exemplary cricketer, genius coach, mentor, who loved cricket and cricket loved back.
Above all, a gentle, generous and kind soul.
One of a kind.
Thank you. @jats72

Throughout his career, Shri Vasoo Paranjape Ji moulded careers of countless cricketers through his in-depth understanding of the game and man-management skills. He made them fearless. A man with a vision, who was always ahead of his time. My condolences to @jats72 and his family.

Sachin Tendulkar recalled some of his memories of Vasu Paranjape. “Vasu sir, as I have always known him, was one of the best coaches I have worked with. He has been an integral part of my cricketing journey since childhood and a mentor in many ways. Early in my career, I remember him telling me in Marathi, ‘You watch out for the first 15 minutes and the opposition will watch you for the rest of the day.’ He was knowledgeable, lively and had a great sense of humour. I had visited him a few months ago and he was his usual humorous self.

“During our under 15 national camps in Indore, the caretaker had gone complaining to him (as Coach) about us boys playing with a tennis ball in the night, keenly expecting some support and stringent action. Vasu Sir in his inimitable style reacted, ‘They are kids and will play. Why don’t you also field for them,’ leaving the caretaker stumped! He has left us with many memories and moments to smile. I feel that a piece of me has left the world. RIP Vasu Sir.” 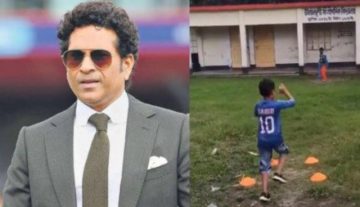 Videos
By CricShots - Oct 15, 2021
A Kid Impresses Sachin Tendulkar With His Deceptive Leg-spin