Fast bowlers have traditionally used the spit and shine technique to shine the ball. This practice helps then later on in the game to generate reverse-swing. Using saliva to shine the ball doesn’t violate any laws of the game. However, things might change once cricket resumes. Former India fast bowler Venkatesh Prasad suggests the use of sweat to maintain the shine on the ball than applying saliva.

The pandemic spread of  COVID-19 can spread through respiratory droplets. This could lead to the practice of using the saliva to shine the ball being banned. In such a scenario, Prasad feels that sweat can also do the trick and serve the same purpose. He says not using saliva is a practice that needs to be done in such times.

“When the action resumes, they should use only sweat for some time as safety of the players is paramount. When you are in the thick of things, you tend to forget it. You have to get the upper hand over the batsmen as you can’t use anything else besides sweat and saliva”, Prasad said.

Former Australia fast bowler Jason Gillespie also commented on the same. He expressed his concerns over the traditional practice being stopped once the pandemic lockdown is lifted and cricketing activity resumes. Gillespie says fast bowlers like Pat Cummins and Josh Hazlewood will find it very difficult to not shine the ball. He says how it will make life extremely tough for fast bowlers like them now.

However, Prasad believes conditions play an equally crucial role in the same. He says that sometimes the conditions limit the use of sweat/saliva on the cricket ball.

“It doesn’t matter if you use saliva or not. As long as you apply the appropriate amount of sweat and shine it off. If the other side tends to get rough, automatically you get reverse swing. When I got 6/33 against Pakistan in Chennai, the reverse swing happened because of the condition of the ball, pitch, and the weather. So, it is not just about saliva. A lot of other factors also come into play,” he explained. 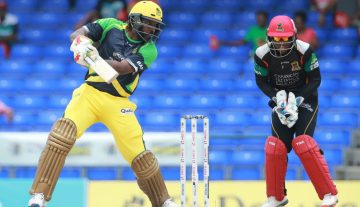 Article
By CricShotsStaff - May 16, 2020
Chris Gayle Adamant on his Remarks about Sarwan’s Shenanigans