Gujarat Titans’ Director of Cricket Vikram Solanki has said that the franchise is satisfied with Hardik Pandya’s progress about his fitness. Pandya will lead the new IPL team for the very first time in a match against the Lucknow Super Giants, at the Wankhede Stadium in Mumbai, as per the IPL 2022 schedule.

He feels that Pandya is aware of the team’s requirements as well. In an interview with The Telegraph, the former England international said: “Hardik is working extremely hard in all aspects of his game, from the rehabilitation and recovery point of view. He is conscious that he has to get up to speed with batting, bowling and fielding… He is on his path to recovery and playing a full part but we have to be patient with the demands.”

Solanki added: “Remember, he is coming back from an injury. Hardik as a batsman is an exceptional addition to any team. But if we take batting, bowling, and fielding together, then he’s a complete package. But having said all that, we have to be conscious of his long-term plans. We are very happy with the way he is progressing.”

The all-rounder last played for the national team at the T20 World Cup in late 2021. He was then dropped from the team for the home series against New Zealand. He started his rehabilitation work in Mumbai and will be a part of the ongoing 10-day fitness camp arranged by the BCCI at the National Cricket Academy in Bengaluru as well. Solanki, however, said that Pandya will have the backing of the entire support staff at the 2022 IPL.

“We see in Hardik the qualities that can turn him into a successful and very fine captain. We have spoken a couple of times about his track record as far as winning IPL titles is concerned. He has been part of our leadership group and has taken a lot of learnings from other captains like Rohit Sharma, Virat Kohli, and MS Dhoni. He will use all that learning in developing himself as a captain and will be well backed by the support staff,” Vikram Solanki concluded. 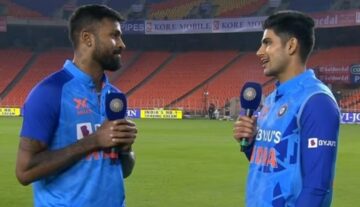