KL Rahul’s first century no.5 went in vain as New Zealand went on to complete a series whitewash in the three-match series against India which completed at Bay Oval in Mount Maunganui on Tuesday. After losing the five-match T20I series 5-0, New Zealand beat India by five wickets in third and final ODI.

During the post-match press conference, Virat said, “The games were not as bad as the scoreline suggests. Batsmen coming back from tough situations was a positive sign for us, but the way we fielded and bowled, the composure wasn’t enough to win games. Didn’t deserve to be on the winning side at all this series.”

ALSO READ: Harbhajan Singh Comments On Ravi Bishnoi Being In The National Squad

Coming in to bat at no.5 position, Rahul helped India recover from a shaky start to post a challenging 296/ 7 but the Kiwis overhauled the target with 17 balls to spare.

Lauding the hosts for their intensity in the field, the Indian skipper said: “Haven’t played so badly, but we didn’t grab opportunities. It was a good experience for the new guys who came in. They are still finding their feet. They (New Zealand) played with lot more intensity than we did. They deservedly won 3-0.”

Speaking about the upcoming two-match Test series, which is scheduled to commence on February 21 in Wellington, the Indian skipper couldn’t hide his excitement for red-ball cricket and spoke about the importance of stepping out with the right mindset.

Kohli signed-off by saying, “We are excited for the Test series. We now have a balanced team. We feel we can win the series, but we need to step out on the park with the right kind of mindset.”

India and New Zealand will now be playing a two-match Test series commencing in Wellington followed by the second one in Hamilton. 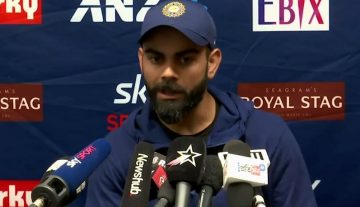