Recently, the Indian skipper, Virat Kohli, and his actress wife, Anushka Sharma featured in Instagram’s #TakeABreak video where they are seen competing with each other in a friendly quiz. In the video, the power couple can be answering a series of questions to prove who knows the other person better.

Sharing the video on Instagram, Kohli captioned it has, “TakeABreak with @anushkasharma and @virat.kohli. She’s an actress (@anushkasharma). He’s a cricket player (@virat.kohli). They’re a power couple. It’s time to #TakeABreak with these lovebirds who give a whole new meaning to friendly competition. Learn more about them and prepare to smile big (sic).”

The video starts with Virat and Anushka introducing themselves. The actress says, “Hi Instagram, We are Anushka and Virat. I’m an actress and Virat is a cricket player in India. We invite you to take a break with us. When you’ve known each other for as many years as we have, you find out a lot of funny and interesting things about one another.”

Joining in Virat had said, “And today, we are going to ask each other three sets of questions divided into three parts relating to our profession, our lives about each other. And we’ll see who knows who better. To begin with what Anushka knows about cricket. And let’s see what Virat knows about the Hindi film industry, also popularly known as Bollywood.”

Anushka Sharma and Virat Kohli got hitched in December 2017. They are currently in quarantine at their Mumbai home. They often share cute pictures of each other on social media.

Kohli will now get back to the field for the IPL 2020, which is scheduled to be taking place Dubai, Sharjah, and Abu Dhabi, this year because of the increasing cases of the coronavirus pandemic. On the other hand, Anushka is expected to portray the role on Jhulan Goswami in her biopic. 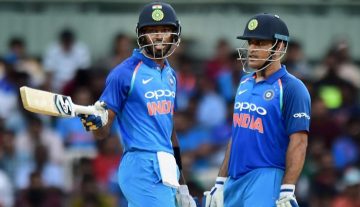 Twitter Reaction
By CricShots - Jan 28, 2019
Twitterati Erupts As Hardik Come In For 3rd ODI And Dhoni Goes Out