The Indian skipper, Virat Kohli has come in support of his deputy, Ajinkya Rahane despite the veteran batter’s dry spell and absence from Monday’s thumping second Test win over New Zealand, promising his team will support past performers. Rahane didn’t feature in the playing XI of the final game due to a hamstring niggle as Kohli returned from a break to take his place. Rahane has averaged under 20 in 12 matches this year and his injury pull-out was judged by Indian media as a respectable way to drop him in Mumbai.

Talking to the reporters about Rahane, as per the quotes in Hindustan Times, Virat Kohli said, “I can’t judge his form. No one can judge it. Only the individual knows what he’s going through. We need to back them in these moments, especially when they have done well in the past. We don’t have this environment where we have our players asking ‘what happens now?’.”

India won the second Test by 372 runs to register a 1-0 series win in Mumbai. Kohli said his team were flying high despite losing the World Test Championship final to New Zealand in June and failing to reach the T20 World Cup semi-finals last month.

Talking about the win, Virat Kohli said, “The year has been very good for us, we have played very good cricket. There were two setbacks in T20 World Cup and World Test Championship. Victories in England and in Australia gave us a lot of confidence. See, the Indian team is expected to win everything but that’s not realistic, we know what we need to work on and improve on and look forward.”

Opener Mayank Agarwal was named man of the match in Mumbai for his 150 and 62 in India’s dominant batting show. The team is currently brimming with young talent including Shreyas Iyer, who sparkled on debut in the first Test with 105 and 65 to make his case in the long-format team.

Talking about Siraj, head coach, Rahul Dravid said, “It’s a good situation to be in, we’ve had injuries in the lead-up, so we need to manage our players physically and mentally. It’s going to be a large part of my challenge. Challenge too for the selectors and the leadership group. It’s a good headache to have.”

ALSO READ: Chris Gayle Will Be Playing His Last International Match In January 2022

The Indian team will not be traveling to South Africa for three Tests starting December 26 followed by three ODIs in a tour shortened by worries over the new Covid Omicron variant. 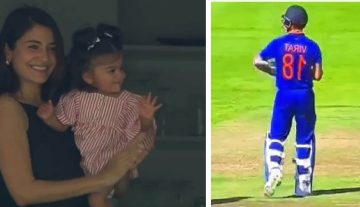