The Royal Challengers Bangalore (RCB) skiper, Virat Kohli had a “proper day at the pool” on Tuesday and he has let his fans know with a picture he posted on Instagram. In the picture, he can be seen relaxing on his back on a recliner as he cheerfully poses for the camera and gives out the victory sign.

The RCB captain has his task in hand for the 13th season of Indian Premier League (IPL) in terms to helping his team win their maiden IPL title, but his pool times are much-needed for him and the team as a respite from the heat and humidity in the UAE, IPL’s host for the season. His RCB teammates Pawan Negi and Gurkeerat Singh Mann also enjoyed themselves by the pool.

ALSO READ: Preity Zinta Has A Special Message For KXIP Ahead Of IPL 2020

However, in the post uploaded by RCB, AB de Villiers, Dale Steyn, and Navdeep Saini can also be seen enjoying in the pool alongside their skipper.

A proper day at the pool yesterday 😃🏊

A post shared by Royal Challengers Bangalore (@royalchallengersbangalore) on Sep 16, 2020 at 12:36am PDT

Actor Varun Dhawan was impressed with Kohli’s chiseled muscles as he commented: “Ripped.” Kohli is the highest scorer in the history of IPL as he has amassed 5412 runs. However, his runs haven’t translated into title wins for his team RCB, despite reaching the finals thrice – 2009, 2011, and 2016 – but are yet to win the league.

Ahead of IPL 2020, Kohli is optimistic nevertheless as he said that the current RCB team is the “most balanced” that he has had since 2016 when the team last made the final.

The addition of Aaron Finch, the No.3-ranked batsman on the ICC T20I rankings, can be a huge boost to RCB as their top order had so far been heavily dependent on the performances of Virat and AB de Villiers.

Bowling has always been RCB’s weaker link and the likes of Umesh Yadav, Mohammad Siraj, Navdeep Saini, and Yuzvendra Chahal would hope that since the tournament has been shifted to UAE would give the bowlers some cushion against the power hitters of T20 cricket. RCB play their first match against SunRisers Hyderabad (SRH) on September 21. 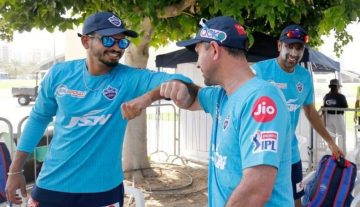