On Wednesday, the Indian skipper, Virat Kohli urged critics and the media to cut some slack for Rohit Sharma and let him enjoy his batting in Test cricket for now. Rohit has had a memorable debut as an opener in Test cricket as he scored 176 and 127 in the Vizag Test to set up a 203-run victory for the hosts against South Africa.

KL Rahul not managing to score consistent runs forced the Indian team management to go ahead with Rohit as the second opener with Mayank Agarwal in the first Test and Rohit grabbed the opportunity with both his hands.

During the pre-match press conference ahead of the 2nd Test against South Africa in Pune, Kohli said, “Come on give the guy a break now. He has done well. Let him enjoy his batting at the top of the order. Let him have fun as he does in white-ball cricket. Stop focussing on what Rohit is going to do in Tests. He looked relaxed in the 1st Test which is a great thing. All the experience he has accumulated over the years came to the fore.”

He further added, “For us, the team, it’s a huge bonus. If you see the way he played in the 2nd innings, the way he has the ability to take the tempo of the game forward, that allows the bowlers to have an extra hour and a half of maybe 2 hours to bowl the opposition out. So, look if a guy like him at the top order plays the way he did in the first Test, we are going to be in situations from where we can go for victories in most of the Test matches.”

Kohli almost revealed India’s playing Xi for the second match and made it clear that Ravichandran Ashwin and Ravindra Jadeja will always be their first-choice spinners in home Tests.

Virat explained, “A lot has been said and spoken about the system that we have followed in the last 2 years. The only thing that matters to us is wanting to win as many games as we can. We have been able to do it. We have among the least losing percentages. We don’t want to be rigid in our thinking saying this is how we need to go forward. We want to be flexible. No one is self-centered. Everyone is thinking about how to contribute to the team’s win. Same with Kuldeep as well. He understands the combination. In India, Ashwin and Jadeja are going to be our first-choice spinners.” 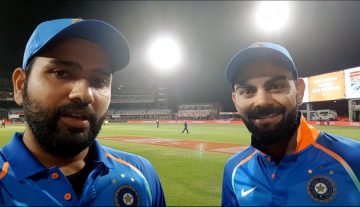 Article
By CricShots - Feb 15, 2018
Rohit and Virat Does A Selfie Interview For Their Fans