The Indian power couple Virat Kohli and Anushka Sharma are one of the most-followed people on social media as they both look adorable together. The duo tied the knot with each other in December 2017 in a private ceremony in Italy. Both Virat and Anushka have often been seen expressing their love and admiration for each other on social media. They regularly post pictures of themselves on their respective Instagram handles with heartwarming captions. Recent photoshoot of Anushka gathered a lot of appreciation.

Recently, Anushka hogged a lot of limelight in social media after her latest photoshoot for Vogue. Her mesmerizing pictures were immensely appreciated by the B-town. All the photos posted by Anushka received millions of likes from her fans and followers within a short span of time. Also, her comment section was filled with heart emoji and praises.

However, one comment which gathered eyeballs came from her husband Virat Kohli. The cricketer was drooling over the smoking hot photoshoot done by his wife.

In the first picture posted by Anushka, she can be seen sporting a blue off-shoulder crop top along with sexy bottoms and sheer netted pants. Virat dropped a lovestruck and heart emoji along with the fire emoji on one of the pictures by Anushka.

Captioning the picture, the Bollywood actress wrote: “The cool breeze , the steady waves, some sand on my skin, the sun on back and salty hair . It was a good day. @vogueindia @anaitashroffadajania,”

The cool breeze , the steady waves , some sand on my skin , the sun on back and salty hair . It was a good day 💜 @vogueindia @anaitashroffadajania

Being a lovable husband, Virat didn’t forget to leave a comment on all the four pictures posted by Anushka Sharma from her Vogue photoshoot. In the second picture posted by his wife, she can be see wearing a  bikini on a sleeveless yellow crochet shrug. This particular pic of Anushka made her husband go berserk.

While Virat shared two lovestruck and one heart emoji in the comment section, Alia praised Anushka for her beauty. She wrote, “Such a beaut.”

On the other two posts also, Virat left similar comments which included heart and love emojis. Here are some more pictures of Anushka’s photoshoot:

In the end , it's only a game of light and shadow 💫 @vogueindia @anaitashroffadajania 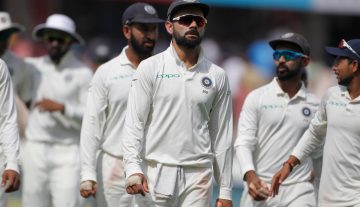 News
By Sandy - Nov 30, 2018
Dean Jones: If India don’t win this series, they will never win in Australia