Twice in the series, India got the chance to win the Test while chasing the target and their batting collapse result in another defeat. The Indian batting unit, except the skipper Virat Kohli, let the team down against and they staged a meek surrender.

While chasing a 287-run target in the second Test in Centurion, Virat Kohli and his men failed to put up a fight and were bundled out for just meager 151. Apart from Rohit Sharma, who top scored with 47, all batsmen were looking clueless in the second innings. At the post-match presentation, Virat said the team should have capitalized in the first innings where South Africa lost wickets in quick succession.

Talking about the match, Kohli said, “Yeah (the wicket gave us our best chance). We thought the wicket was really flat. Quite surprising. I told the guys the wicket looks different to what it looked before the toss. I thought it was our chance to put some runs on the board. Especially after SA lost wickets in the first innings, we should have capitalised.”

India bowled out South Africa for 335 in the first innings but their batting wasn’t upto the mark as they failed again in the series. Except for the skipper, no batsman stayed out for long and the team failed to stitch partnerships.

When asked about the lack of partnerships, the Indian skipper acknowledged, “We failed to get a good partnership and take the lead. We have let ourselves down from the first game into the second. The bowlers have done the job but the batsmen have let the team down again and that’s why we stand here.”

Kohli’s innings of 153 runs in the first innings were absolutely brilliant but he said it meant nothing because the team lost the match and the series. He said, “I want to leave everything on the field, for my country, for my team. That’s the way I play. 150 (153) means nothing right now that we have lost the series. If we had won, even a 50 or a 30 would have mattered more to me. Having not won the game, personal milestones don’t matter to me. As a team, you want to win collectively.”

Virat concluded, “We tried but we weren’t good enough. South Africa were better than us, especially in the fielding department, and that’s why they are the winners. And they deserve to be.” 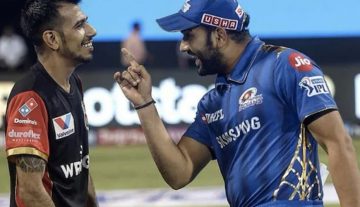 Social Shots
By CricShots - May 21, 2020
Chahal And Rohit Display Camaraderie In A Throwback Picture