After losing the second Test against the hosts Australia at the new Perth Stadium (Optus Stadium), Indian skipper Virat Kohli feels that the openers should need to take more responsibilities but he is backing them up.

The visitors India started the four-match Test series with a 31-run victory at Adelaide but failed to carry that momentum as they faced a 146-run defeat against the hosts at Perth. As currently the series is levelled by 1-1 with two matches to go, Indian skipper claims that the opening batsmen need to take more responsibility to get success in the next matches.

Especially, both the openers Murali Vijay and KL Rahul have hugely disappointed with their batting in this series. At the end of the first two Tests of the series, the openers have just scored 97 runs in overall with the average of just 12.12.  While Rahul has scored 48 runs in this series (average 12), Vijay has scored just one run more of him (49 runs with the average of 12.25).

After the end of the Perth Test, when Kohli asked about his reaction of the openers’ performances, he said, “We just have to keep backing them and telling them they belong and they are good enough to perform. It’s not even giving someone individual goals – you are just telling them this is what we require as a team from the openers and this is the role that needs to be fulfilled.

“I think as a batting group, we have spoken a lot about those things, executing it or not again is a thing of variables in a sport when you are up against a guy that is bowling a ball at you at a time.

“You can get out, you can survive or you can play a big innings or you can’t. I am sure that these guys have figured out what has gone wrong in this game, especially, and they are very keen to correct themselves. There is not much you can say, to be honest – you just have to be confident as a side and believe that the role has been given will be fulfilled.”

Also read: Tim Paine: We Are Certainly Not Going To Sit Back And Be Walked All Over

While the young opener Prithvi Shaw has been ruled out from the remaining Test series on this tour, the all-rounder Hardik Pandya and opener Mayank Agarwal have been added in the Test squad.

Though India was already down to 112/5 before the start of day five, Kohli had the belief that they could still win the game.

“We urge them to believe that they can do something very special. If it’s been done in the past and, now we remember those names as great players of the game, why can’t individuals coming into the team do the same thing?

”You have to dream big, you have to chase glory, you have to think of the ultimate situation where you are bailing the team out, where you are winning the game and that’s the mindset that everyone takes out on to the field and they want to be the match winners for the team every time.”

From the beginning of this Test, Kohli and team management have been criticised for their selection of playing XI where there were no spinners and four pacers. As the off-spinner Ravichandran Ashwin was injured, he missed this game but the team had a chance to pick up Ravindra Jadeja or Kuldeep Yadav as the spinner. Initially, Jadeja was in the 13-man squad for the Perth Test but failed to get a chance.

Though Kohli admitted that Ashwin or Jadeja could give more stability in their batting, he still felt that it was their best combination and the batsmen had to take more responsibilities.

Kohli added, “Ashwin and Jadeja have more ability with the bat, we all know that, so it’s a very tricky decision to make. It’s kind of (whether) it’s a bowling option you want to go with or whether you think that guy can contribute with the bat or not. Whether it comes off or not, that’s a different thing – but we were totally convinced as a team that that was our best combination to go with and the batsmen have to take the responsibility. There are a lot of variables that can happen during the course of a cricket match.” 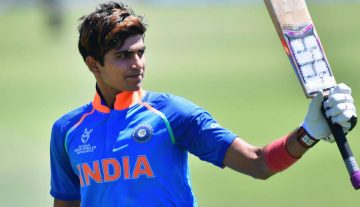