The final Test of the Border Gavaskar Trophy at the SCG started on a good note for India. After electing to bat first, the likes of Cheteshwar Pujara and Mayank Agarwal put up a brilliant performance show with the bat. While Pujara scored his third century in the series, Mayank registered his second fifty. At stumps on Day One, India were 303/4. Surprisingly, the Indian skipper, Virat Kohli walked out to bat today, he was wearing pink gloves. His bat also had a pink grip.

Kohli stayed at the crease for some time but couldn’t convert it into something big. However, he still ended up earning a lot of adulation from the fans. His gesture of going pink was in order to support Glenn McGrath Foundation’s Pink Test which raises awareness and funds for breast cancer.

The first Test match of the year played at the Sydney Cricket ground (SCG) is called a Pink Test. This is in the memory of McGrath‘s wife who lost her life due to breast cancer. Ever since then, the Test match at Sydney Cricket Ground is referred to as the Pink Test. Day Three of the Test will be known as the Jane McGrath Day.

The Ladies stand will be known by that name for the particular day. All the profits earned through the Pink Test will be donated to the Glenn McGrath foundation. Hence to watch the Indian skipper contributing his bit to the cause was quite heartening for fans across the globe. Even Jason Gillespie went on to laud the gesture on Twitter.

Twitterati applauded the gesture from the Indian captain as appreciations poured down from all corners as the fans were quite happy with Kohli’s actions. Usually, the 30-year-old isn’t a favorite of the crowd, especially in Australia where he has been constantly booed, every time he arrived to bat. Maybe this incident will allow the local fans to explore the other side of Kohli as well.

Here we have some of the Twitter reactions in regards to Virat Kohli’s gesture in the Pink Test:-

Amazing gesture by the Indian skipper to show his respect towards the Sydney Pink Test 💕 pic.twitter.com/PYoLDjqfHs

Pink gloves and bat grip are not helping Virat, I reckon.#AUSvIND

Virat going all pink for Mcgrath foundation and some idiots in the stadium booing him. Such morons!! #ausvind pic.twitter.com/EiLo97gQmw

One for the occasion – Going all Pink Mr. Kohli #TeamIndia #AUSvsIND pic.twitter.com/dfVnQ65XYw

Change of contact lens for @imVkohli Impressive the way he has bought into the Pink Test. #mcgrathfoundation pic.twitter.com/gGyVGCt4rm

Virat Kohli walks out to bat with a tinge of pink in his gloves, pink grip & pink MRF bat sticker in this Pink Test Match. Lovely to see! #PINKTEST #AUSVIND 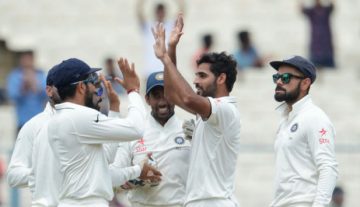