The Teacher’s Day is celebrated in order to appreciate the contribution of teachers in our lives. In India, the occasion is celebrated on September 5, the day when the former President Dr. Sarvepalli Radhakrishnan Virswami was born. Indian skipper, Virat Kohli has grown in stature over the years and never backed out in admiring his childhood coach Rajkumar Sharma.

Four years ago in 2014, the Indian skipper gifted his coach a Skoda Rapid on the occasion of Teacher’s Day. It was handed to him by Virat’s elder brother Vikas. As expected, the gift overjoyed Rajkumar and he appreciated how Virat values his mentor’s contribution to his life and career. The same was mentioned by Vijay Lokapally in his book ‘Driven’, released back in October 2016.

In his book, Lokapally wrote, “I answered the bell and found Vikas (Kohli’s elder brother) at the door. His brother’s arrival at his house so early in the day was cause for concern. Vikas stepped into the house, dialed a number and handed his cell phone to Raj Kumar. ‘Happy teacher’s Day Sir,’ said Virat, even as Vikas thrust something into Rajkumar’s palms – a bunch of keys.”

He further added, “Rajkumar stood perplexed as Vikas requested him to step out of his house. A gleaming Skoda Rapid was parked at the gate – a gift from Virat to his mentor. It was not merely because he had gifted me the car. It was because of his emotional touch to the process of reminding me how much he treasured our association and valued the role of a teacher in his life.”

Kohli is currently leading the Indian team in the five-match Test series against England. Despite being the highest run-scorer in the series with a tally of 544 runs at a stupendous average of 68, the visiting team has conceded an unassailable lead of  1-3 to the hosts after the 60-run defeat at The Ageas Bowl in Southampton. The fifth and final match will be played at Kennington Oval in London, starting September 7. 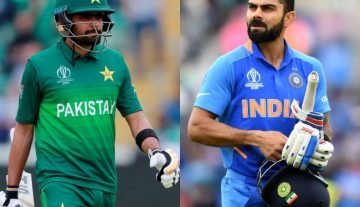 News
By CricShots - May 25, 2020
Misbah-ul-Haq Finds Babar Close TO The League of Virat Kohli