The Indian skipper, Virat Kohli toyed with the South African bowlers at the MCA stadium in Pune as he scored his 26th century in Test cricket. In the post-lunch sessions on Day 2 in ongoing Test, Kohli adopted a more attacking approach and in no time reached the 200-run mark — the seventh time he has done so whilst leading the Indian team.

In the process, Virat broke the legendary Don Bradman’s record of most 150-plus scores as captain as he surpassed the mark for the 9th time as the skipper and 10th time as a player. Kohli and Bradman great were tied at eight before the Pune Test but Kohli went past the former Australia skipper on Day 2 of the second Test with his ninth 150-plus score as captain. Kohli also

This is Kohli’s 7th Test double century and all of them came as a captain and he equaled former Sri Lanka captain Mahela Jayawardene and legendary England cricketer Sir Wally Hammond to notch up seven 200-plus totals in the longer format of the game.

Kohli went on to score 254* before he declared the Indian innings at 601/5. This is his highest individual total in Test cricket by an Indian skipper. He is only the fifth Indian batsmen to scored 250+ in a Test innings for India (Virender Sehwag four times, VVS Laxman, Dravid, and Karun Nair have done it once).

Virat has slammed most double centuries for India in Test cricket as he surpassed greats like Sachin Tendulkar and Virender Sehwag, both of whom had scored in excess of 200s on six occasions. The fact that all of Kohli’s double-centuries came as a skipper makes the achievement even bigger.

Most 200s for India in Test cricket

Kohli also completed 7000 Test runs in this innings and he’s now only behind Tendulkar, Dravid, Gavaskar, Laxman, Sehwag and Ganguly.

ALSO READ: Mayank Agarwal Shares His Secret Behind the Success

Most Test runs from Indians

Kohli equaled the record of  Gary Sobers and Kumar Sangakkara as he entered the elite 7000 runs club. He’s only behind Sir Wally Hammond, Sehwag, and Tendulkar to this club. 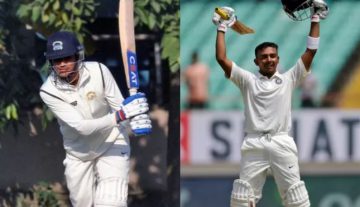