After registering the first ever series win by a margin of 2-1 against Australia Down Under, the Indian skipper Virat Kohli had all praises for his team stating that he has never been more proud of a team than this one.

During the post-match presentation, Kohli expressed his joy of winning the Test series, he said, “Firstly I want to say, I’ve never been more proud of a team than this one. Our transition started here when I became the captain for the first time. Only one word to say, I’m proud. To lead these players is an honor and a privilege. They make the captain look good. Definitely, deserve to enjoy this moment.”

However, it wasn’t an expected end for India in the series as no play possible on the final day, but the result of the series was already decided and Virat proclaimed the series win as the best achievement of his career so far.

Describing the same, the Indian skipper said, “By far this is my best achievement. Has to be on top of the pile. When we won the World Cup, I was a young player. I saw the others getting emotional. This series will give us a different identity as a team. What we’ve been able to achieve is something to be really proud of. That’s something that we spoke about, just wanted to go back to basics, not be flamboyant.”

The veteran Indian batsman, Cheteshwar Pujara, who scored 521 runs in four matches was the highest run-scorer in the series and hence, he was named as Player of the Match and Player of the Series for his 193 in the first innings at the SCG.

Praising him, Kohli said, “Want to give a special mention to Pujara. He’s one guy always willing to accept things. He’s the nicest man around. Special mention to Mayank Agarwal too. To come in on Boxing Day and play like that against a high-quality attack. Someone like Rishabh as well, coming into his own and dominating attacks.”

While Pujara played a crucial role with the bat for India, bowlers, Jasprit Bumrah spitfire with the ball and helped India register this historic win and Kohli was all praise for his quicks.

Virat said, “The way the bowlers have dictated terms in this series. And not just this one, the previous two tours as well. I’ve not seen happen in Indian cricket. They don’t look at a pitch and think there’s nothing for us. It’s a revelation for Indian cricket and the learning for the other bowlers back home. They definitely deserve to be here and breaking record of the great West Indian fast bowlers is no mean feat. Definitely, this is just the stepping stone for us.”

Kohli also expressed that this series win is just the start of this young team as he feels that the average of the team is a bit low and their biggest strength is the belief.

On the other hand, the Australian skipper Tim Paine congratulated India for their historic series win and conceded that the visitors outplayed them in the big moments in the series. He said, “Tip our hats to India. We know personally going to India and playing in foreign conditions, how difficult it is. Huge effort to come and win a series overseas. In the last two Tests, no doubt (India outplayed us). (We) Had our chances to win in Adelaide. India outplayed us in big moments in that Test. In Perth, we did well. But we were outplayed in these last two Tests.”

Talking about Australia’s performance, in which none of the Australian players managed a score a century, Paine said that the team will be focussing on the positives from the series.

The Aussie skipper explained, “I know there’s been a lot of gloom and doom of late. (We have) Got some talent in this team. They were playing against potentially the best pace attack in the world. Hopefully, they’ll learn. We’ve got guys outside the group that is putting pressure as well, so that’s a good thing. Our group is under no illusions. Cricket is a funny game. We know it can turn very quickly.”

After an high-intensity series, Australia now set sight on series against Sri Lanka, and Paine says the team will take their team out before starting preparation for upcoming series. 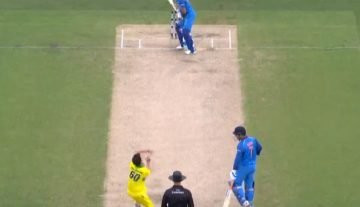 Videos
By CricShots - Jan 18, 2019
WATCH – Fuming Virat Kohli After His Dismissal In Melbourne