The Indian skipper, Virat Kohli has revealed that legendary Australian leg-spinner Shane Warne made him look like a fool during the second edition of the Indian Premier League (IPL). Kohli was doing an Instagram live session with the Indian football captain, Sunil Chhetri and during an Instagram live chat, the latter played a rapid-fire round with Kohli.

Chhetri asked Kohli: “You need three runs of the last ball, you can choose the bowler, I am giving you two options– Shane Warne or Waqar Younis”. Virat replied: “Firstly Shane Warne hardly bowled during the death overs and secondly I would believe in my ability to score off the yorkers bowled by Waqar Younis.”

ALSO READ: Virat Kohli Willing Act In his Own Biopic With Anushka Sharma

He further elaborated, “Shane Warne made me look like a fool during IPL in 2009. I played him again in 2011 in Rajasthan, nothing significant happened there. He did not get me out, I did not score many runs against him. After the match he came up to me and said never say anything back to the bowler, but obviously I did not listen (laughs).”

Chhetri also asked Kohli about one innings he would have liked to play from the past. Kohli replied: “Desert Storm, Tendulkar’s semi-final innings of 140+ against Australia in Sharjah in 1998”.

When asked if he will work in his own biopic with Nauhska, Kohli replied, “With Anushka, I will definitely do the biopic myself.  But let me clear up this misunderstanding that I can act. I can, however, act in my own biopic because I can essay my own role quite well. I hope. If anyone else plays the role better than me then bilkul hi nitthala aadmi hu main! (I’d be quite useless!)” 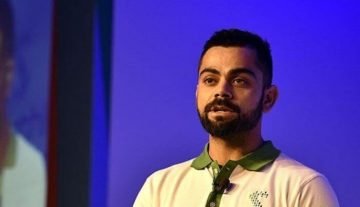