India is currently in New Zealand for the ongoing tour. On Day 2 of the second Test, the hosts batting line up crumbled in front of the Indian pace bowling attack. After the great show, they received praises from the cricketing fraternity. But, one thing that hit the headlines other than Team India’s stunning show was the rivalry of Virat Kohli and New Zealand crowd due to which Kohli came out with some heated moments on the second day.

New Zealand got off to a poor start on Day 2 as they lost their opener, Tom Blundell, just after adding only three runs to the scoreboard. He got out in front of the stumps off Umesh Yadav. Kane Williamson, the captain of New Zealand, who came out to bat on number three was sent back to pavilion very cheaply as he nicked the outswinger bowled by Jasprit Bumrah and was caught by Rishabh Pant behind the stumps.

The brilliant fast bowling of Indian pace attack that comprised of Jasprit Bumrah, Umesh Yadav and Mohammed Shami dismantled the line up of Kiwis. They were dismissed for a score of 235 runs that was seven runs less than the score posted by India in their first innings.

Read here: New Zealand on top after the dramatic second day in Christchurch

Although Indian bowlers made the headlines with their superb bowling, there was one thing that came in the limelight was the behaviour of Virat Kohli as he was spotted using some abusive words towards a particular section of the crowd that was chanting for New Zealand. The incident took place after the dismissal of Kiwi batsman Tom Latham off Mohammed Shami.

Soon after the dismissal, Virat Kohli jumped with excitement and turned towards a section of the crowd and said, “Shut The F**K Up.” It was easily readable from his lip-sync in the video that went viral on social media. 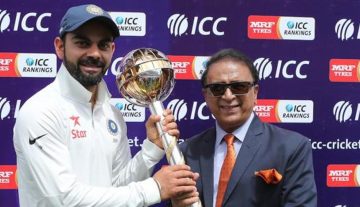