On Wednesday, the Indian skipper, Virat Kohli showered praised for the Indian bowlers for their match-winning performance as India registered a comfortable 8-wicket win over New Zealand in the first ODI. After being asked to bowl first, the visitors bowled out the Blackcaps for 157 in 38 overs, with the veteran pacer Mohammed Shami picking up 3 wickets and Kuldeep Yadav getting bagging four.

Speaking at the post-match presentation ceremony, Kohli said: “It was one of our more balanced performances in the last few games. When I lost the toss, I thought it was going to be 300 par. One-fifty-odd on that wicket was superb.” He also added that India’s fast bowlers believe they can knock down any side in the world. He said, “The fast bowling group together believe they can knock any side over.”

Speaking on Shami’s performance, who recorded figures of 19/3 in six overs, and earned the man of the match award. He also hailed the spinners – Yuzvendra Chahal, Kuldeep and Kedar Jadhav who divided 7 wickets among themselves.

WATCH – Virat Kohli Does A Dharmendra Dance After Napier ODI

Virat elaborated, “Shami has belief in his own ability and his fitness – this is the fittest I’ve seen him in his career. And his Test form has translated into one-day cricket. The pitch got slow in the second half of the innings but in the first half the spinners bowled well, cramped the batsmen and they still made it difficult despite the dimensions on the field.”

Chasing 156, the Indian opener Shikhar Dhawan played an unbeaten knock of 75 runs in 103 balls to take India to an 8-wicket win. Kohli recognized the role played by the southpaw and added that it will boost his confidence. He said that they had spoken about how Dhawan needed to finish games for India, he can be a great asset if Dhawan enters that mindset.

On being asked about the sun stopping play, Kohli said that it has never happened to him in his career. He said, “Never had that happen. 2014, I got out once with the sun in my eyes and this rule wasn’t there then.”

Shami, who was the star player for India in the bowling attack, credited the support staff for helping him recover from injuries that hampered his career.

The pacer elaborated, “Success boils down to the hard work by the team on the whole. And we always have plans for players. Plan A, Plan B. We can go from one to the next. Coming back from injury, we have good facilities provided to us. It changed things for me a bit. It was a big blow. For the next 18 months, I was in rehab. I trained really hard and when I came into the team, everyone backed me, the management, the captain and so I was able to push my limits, keep getting fitter and fitter.”

On the other hand, the Kiwi skipper, Kane Williamson also praised the effort of the Indian team. He felt that the visitors performed better than their expectation. He also addressed that their energy on the field was good enough to beat the Indian team.

Williamson said, “It wasn’t our best effort. We expected INdia to be good and they were very good. It wasn’t the traditional surface here. But it wasn’t hard. We just had to get through the slower balls but I do think their lengths were immaculate. Obviously, 150 on the board on a surface where 250 was par was hard. Sometimes you come here and think it’s 350-plus. This one needed a bit more graft. All the Indian bowlers contributed but we do need to be better. I do think our energy in the field and with the ball was good though and we need to move on from this game quickly” 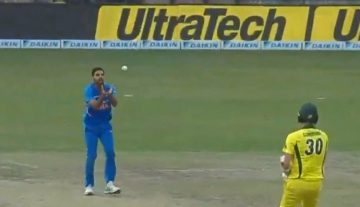