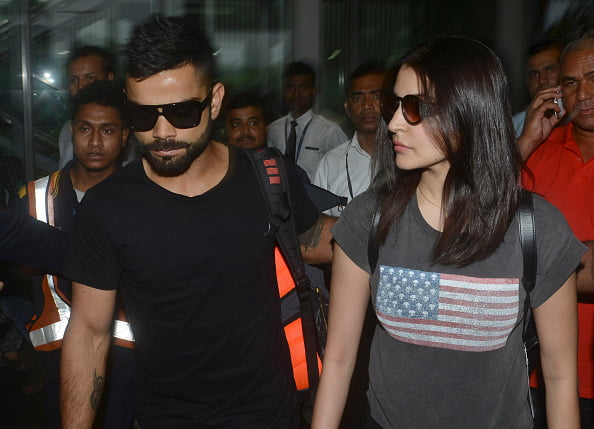 Indian skipper, Virat Kohli is definitely in a celebrating mood after a victory against South Africa. With registering a blistering win in this match, men in blue are all set to defend their title in the ICC Champions Trophy 2017.

Whenever it comes to Kohli, his love life with Anushka Sharma has always hit the headlines and this time as well there is no surprise to that. From the couple, Kohli has always been expressive about Anushka and himself. From posting valentine’s messages to women’s day wishes for Anushka, Kohli has actively shared his views on the social media.

During a recent conversation with ICC Champions Trophy broadcaster, Star Sports, Virat Kohli revealed that how Anushka’s presence is lucky in his life. Virat notified about the two incidents when the presence of Anushka has made all the difference for him.

Firstly, when he was elected as the Test captain for India for the first time and secondly when he was named as the Indian skipper in all the three formats. It’s easy to guess for a Virat’s fan that Anushka does have a bright glitter which brings our skipper a preponderance of luck in his life.

Describing those two incidents, Kohli said, “I was in Mohali and there was a Test series going on. I was with Anushka then, she had come to visit me. Surprisingly, when I became the Test captain then also she was in Melbourne with me. That was a very special moment we shared together. During the Mohali incident, they (BCCI) had spoken to me already. When I hung up the phone and told her, for me it was like a flashback. From the moment I started playing in my academy until the Mohali game. I was emotional. I was in tears because I had never thought that I will see this day.”

He further added, “What was more beautiful was that I was able to share it with Anushka. It was something that I will always remember.”

Here is the video, where Virat expressed the feeling for his lucky charm: