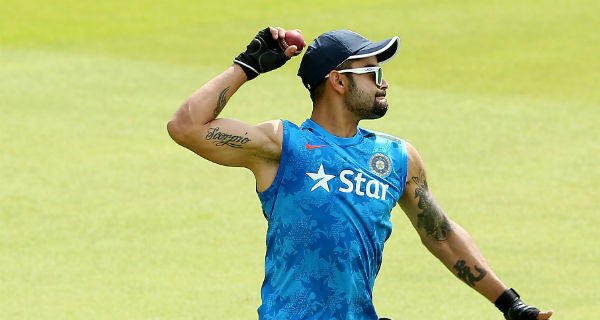 It is a well-known fact to the cricketing fraternity that the Indian skipper Virat Kohli is a fitness monster. He is pretty consistent in uploading photos and videos of him working out on different social media platforms.

In a recent analysis video on Star Sports, they have proved that Virat has transformed himself into such a fast athlete that now he can run almost as quick as the renowned Olympic medalist from Jamaica Usain Bolt. Bolt runs 100 metres in between 9.58 and 9.75 seconds.

Considering the first 20 metres of Bolt’s sprint, he takes around 2.8 seconds, while, Kohli is not so far behind, as he takes only 3.15 seconds for the similar distance.

Kohli’s speed is actually pretty fast from a cricketer’s point of view. Needless to say, when it comes to sprint and racing, every fraction of a second matter. And by the same logic, there would possibly be many other athletes running with the speed languishing between the speeds ticked by Virat Kohli and Usain Bolt. However, restating the same fact, Kohli’s speed when it comes to running is unbelievably fast.

Once in a tweet Kohli had said that he wish could have as fast as Bolt and today he has done it. His tweet read: “I wish I could get as fast as you someday @usainbolt. Thanks, legend. @PUMA #ForeverFaster”.

I wish I could get as fast as you someday @usainbolt. Thanks legend. @PUMA #ForeverFaster

Kohli’s speed is pretty fast when seen from a cricketer’s point of view. There would possibly be very few other athletes who are capable of sprinting with the speeds ticked by Virat Kohli and Usain Bolt.

Sports scientist and the founder of a renowned sports institute, Shyamal Vallabhji, recently tried to get the secret behind Kohli’s running abilities. He acknowledged that the fact of Kohli working a lot on his fitness and getting stronger has helped him gain speed. Also, he cited that the game of cricket is such that it unusually allows Kohli to run with his top speed.

Trying to elaborate the secret behind Kohli’s running abilities, Shyamal Vallabhji said, “This transition has come on from the fact that he is now far more athletic. He is far leaner, and he is practicing on his sprint mechanics. And actually, to be honest, if you put him on a 20-metre sprint track, 20-metre probably run quicker than that. It is just that the nature and the mechanics of the game of cricket that he is never ever achieving the top speed.”