Indian skipper Virat Kohli is that one name in the world of cricket which shine through. He is now one of the undisputed champions of the game. After his international debut for India in the year 2008, Kohli was robbed in by Royal Challengers Bangalore in the debut year itself. Since that time Virat has always been a part of the RCB camp. He has huge assets in all formats of the game and IPL is no different.

He was the batsman to score most runs ever in a year in IPL by any batsman and scored 4 centuries back to back last year- one even with his hands stitched. In his 150 IPL appearances, he has 4449 runs in his bag with 113 as his highest score. This year 2018 IPL auction started of by pooling all players with teams who have the right to retain only three of their players.  Kohli became the highest priced player to be retained this year with 17 crores besides his name.

Before the start of IPL, according to Hindustan Times, he became a proud owner of Bentley Continental GT. This car is actually bought by him in name of his elder brother, Vikas Kohli. In the India team, Yuvraj Singh and Virender Sehwag to own this luxury car.

The collection sums up to 14 crores that are actually more than twice the amount of prize money for Pakistan Premier League. On the other hand, RCB has failed to win the title ever in IPL and though the team had heavy names but still failed to perform. This year the skipper is determined to lead from the front and take RCB to the finals. 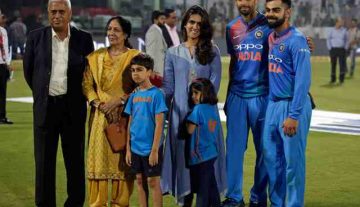 Article
By CricShots - Nov 3, 2017
Ashish Nehra’s Parents Give Blessings To Virat And Dhawan