Former Indian batter turned coach Wasim Jaffer believes young pace sensation Umran Malik will definitely get to play for India but it will take time. However, Jaffer doesn’t think the young pacer will play in the second T20I against South Africa and expects India to stick with the same team as well. Notably, Malik earned his maiden call-up to the Indian senior team after having impressed with his speed and wicket-taking ability in IPL 2022, taking 22 wickets in 14 games at 20.18 as well.

Speaking on ESPN Cricinfo’s Timeout, Jaffer said: “I think it would be unfair to change the team after one game and sticking with the same team would be better. Since it’s a five-game series, there are always chances of getting opportunities later. Hence, I don’t think we will get to see Umran Malik play in this match but definitely moving forwards. I don’t expect too many changes for the upcoming fixture.”

The veteran also said that he expects some respite from the bowlers and added that Ravi Bishnoi should play instead of Axar Patel, given the presence of David Miller and Quinton de Kock.

He said: “India have to improve their line and lengths in Cuttack and the ground is big as compared to Delhi’s. Hence, I expect both the team’s bowling units to find some respite. I also feel the pitch will be good for batting. A bigger ground helps the bowlers. Still, better line and lengths and India could look to play Ravi Bishnoi since another leg-spinner would be handy against the likes of Quinton de Kock and David Miller. It’s possible they could be under-bowled. If Axar Patel doesn’t get to bowl his full quota of overs and anyone can replace him, it should be Ravi Bishnoi. He bowls fast and well to the left-handers. This could be one change and I feel bowlers’ execution could be better.”

However, the Indian bowlers were expensive in the first T20I and failed to defend 211. The Proteas registered a seven-wicket victory thanks to stunning knocks from Dwaine Pretorious, Rassie van der Dussen, and David Miller. “I expect Cuttack’s pitch to play the same as Delhi and teams will look to bowl first because there is heat and an understanding of the target. The pitch becomes better for batting and the ball comes on better. Hence, given these things, sides will look to field first,” Wasim Jaffer concluded. 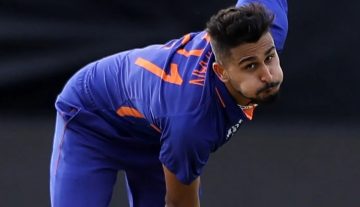 News
By CricShots - Oct 6, 2022
Brett Lee Is Surprised To See Umran Malik Not Getting The Ticket To Australia