Former Indian opener, Wasim Jaffer had a short-lived international career, but he had decided to hang his boots from all forms of cricket after becoming one of the most prolific run-scorers in first-class cricket. Of late, however, it is his sense of humor that has made him the talk of the town on Twitter, as he comes up with apt memes for every situation on a regular basis.

However, Wasim Jaffer has been known for his classy replies when someone tries to troll him, and he showed just that when a Twitter user tried to have a go at him. Reacting to India’s historic win at the Gabba, which also saw them clinch the Test series against Australia 2-1, Jaffer had tweeted: “So what’s gonna be the excuse this time? Ponting, McGrath, and Warne weren’t playing?”

So what's gonna be the excuse this time? Ponting, McGrath, and Warne weren't playing? 😜 #AUSvsIND

For context, Australia’s two best batsmen at the time – Steve Smith and David Warner – were absent due to suspension when India won their first ever Test series Down Under in 2018-19, a fact that was used by some to undermine the visitors’ success.

Responding to the tweet, one user commented: “How many test you played for India ?”

@WasimJaffer14 How many test you played for India ?🤣 have you ever think 🤔

Jaffer responded to the user with a brilliant reply. He tweeted, “I might have played just 31 tests my friend, but when I see the Indian team play I feel like I’m playing with them. And I’m sure a billion+ people feel the same”.

I might have played just 31 tests my friend, but when I see the Indian team play I feel like I'm playing with them. And I'm sure a billion+ people feel the same. 🇮🇳 https://t.co/cGvIAQWzVB

The response immediately won praise from fans. “I’m not for cricketing credentials when it comes to analyses, but in this case 31 Tests sounds like 31 more than the person asking the question!” one user wrote. “Jaffer is a class act. 31 is no measure of this genius in first class cricket. Love Wasim,” wrote another. “The very fact that you have almost 20k runs in our domestic arena is itself a testament to your commitment to the game!” another user commented.

ALSO READ: Indian Contingent Reaches Back To The Country Winning The Series Down Under

Jaffer had amassed as many as 1944 runs in his 31 Tests at an average of 34.10. He hit five tons, including a brilliant 212 against the West Indies. He is currently the batting coach of the Indian Premier League (IPL) franchise Kings XI Punjab (KXIP). 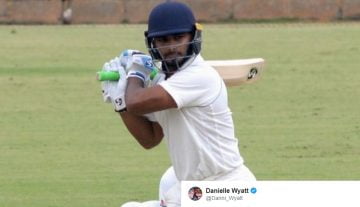