Former India openers Wasim Jaffer and Aakash Chopra took a sly dig at the recently announced the ICC T20I Team of the Decade. The ICC, on Sunday, announced the T20I as well as the ODI and Test XIs of the decade and as expected, the selections of the players especially in the T20I team have received mixed reactions.

Fans and experts come hard on the global body for ignoring several big names as the likes of Babar Azam, Jos Buttler, David Warner, Quinton de Kock, and other eminent names that failed to feature in the XI. Chopra and Jaffer, on the other hand, criticized the ICC for selecting just three specialist bowlers in the T20I Team of the Decade.

The team includes five specialist batsmen, one wicket-keeper batsman, two all-rounders, and three specialist bowlers (1 spinner, 2 pacers). Rohit Sharma, Chris Gayle, Aaron Finch, Virat Kohli, AB de Villiers have been included in teh squad as specialist batsmen while MS Dhoni has been named as the captain and the wicketkeeper.

Glenn Maxwell and Kieron Pollard are the all-rounders in the XI followed by three bowlers, Lasith Malinga, Jasprit Bumrah, and Rashid Khan are the only frontline bowlers in the team. Unimpressed with the selection, Jaffer took to Twitter to mock ICC.

Keeping up with his reputation, Wasim Jadder posted a hilarious MS Dhoni-inspired meme to troll the governing body of the game. Jaffer tweeted, “Only 3 frontline bowlers?! “Hey MS, who picked this team?” before posting a picture of the former India skipper from this year’s IPL where he had famously said ‘definitely not (Jaffer changed the not to the bot)’ after being asked whether IPL 2020 was his last as a player.

Just like Jaffer, Aakash Chopra was also not impressed with ICC’s decision to included just three ‘proper’ bowlers in the team. The former cricketer-turned-commentator took to Twitter to express his surprise over the team-combination. In another tweet, he also cheekily pointed out that Dhoni would refuse to lead the Indian team with only three frontline bowlers. 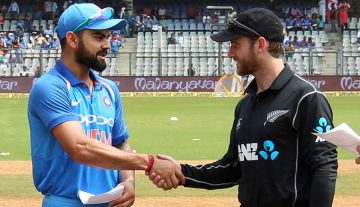