Currently, Team India is locking horns with Bangladesh in the first T20I of the three-match series at the Arjun Jaitley Stadium in Delhi. After winning the toss, the visiting skipper Mahmudullah decided to bowl first citing a heavy dew in the latter half of the innings. India’s stand-in skipper, Rohit Sharma also would’ve preferred the same.

For India, Shivam Dube made his international debut and for Bangladesh, Mohammad Naim received his maiden T20I cap. India lost Rohit in the first over itself, then Kl Rahul along with Shikhar Dhawan added 26 runs for the second wicket before Rahul getting dismissed by Aminul Islam in the 7th over of the game. Shreyas Iyer joined Dhawan after that and smashed the bowler for a six on his second delivery itself.

Iyer again smashed Islam on the final ball of the ninth over and in the next over of the same bowler, he lost his wicket attempting a similar shot. Iyer and Dhawan had added 34 runs for the third wicket as Rishabh Pant came out to bat next but he and Dhawan failed to stay out longer as the latter was dismissed run-out in the 15th over. Dube came out to bat next and he only managed to score just 1 run as he was dismissed by Afif Hossain with a brilliant catch.

On the final ball of the 16th over, Afif delivered a length ball on the stumps and Dube was looking to glance it on the leg side but the ball stopped at him and popped over the bowler’s head who timed his jump to take it with his right hand 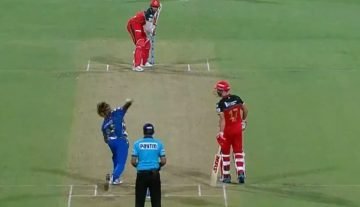