On Thursday, legendary Indian batsman Sachin Tendulkar failed to make his maiden speech in the Rajya Sabha, but on Friday, he took to social media to speak his heart out regarding the importance of sports in an individual’s life.

Sachin uploaded a video on social media after he wasn’t allowed to speak in the Parliament on Thursday and his post read: “It is my endeavor to transform India from being a sport loving nation to a sport playing nation. I urge you all to participate in this effort and help make my dream, our dream. Always remember, dreams do come true! Jai Hind”

In the video, Sachin said, “There were few thing that I wanted to speak about yesterday (in the parliament) and I will try to do the same now. I often wondered what brought me here. Little did I know that those baby steps in cricket will lead me to the lifetime of memories. I always loved playing sports and cricket was my life.”

He further added, “My father Ramesh Tendulkar was a poet and a writer. He always supported me and encouraged me to become what I wanted to be in life. The greatest gift that I got from him was the freedom to play… the right to play and I will forever be grateful to him for that.”

Sachin also asserted that there are many important matters of India that require urgent attention but as a sportsperson would like to stick to sports and fitness. He said, “There are many pressing matters in our country which require our attention – economic growth, poverty, food security, healthcare among many others. Being a sportsman, I am going to talk on sports, health and fitness of India for it has a telling impact on our economy. My vision is a healthy and fit India.”

Earlier, on Thursday, Tendulkar was supposed to speak on ‘Right to Play and the Future of Sports in India’ in Rajya Sabha but he wasn’t able to as the house was recessed after Congress members continued to interrupt proceedings over Prime Minister Narendra Modi’s remark against his predecessor Manmohan Singh and the 2G scam.

Actress Jaya Bachchan, a Samajwadi Party MP, whispered something to Tendulkar. She later told reporters that she told Sachin to sit down until the objections fall. But the Congress members continued with their sloganeering. 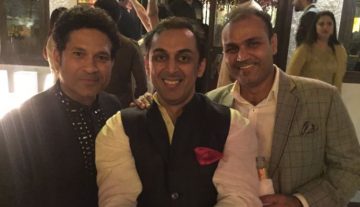 Article
By CricShots - Nov 28, 2017
Rohan Gavaskar’s Recent Tweet Will Leave You In Splits