Ashton Agar and Mitchell Starc join took a spectacular combined catch in order to dismiss the Indian skipper, Viraat Kohli during the second ODI of the three-match series between India and Australia at the Saurashtra Cricket Stadium in Rajkot. It all happened on the first delivery of the 44th over when Kohli’s attempt of going for the full monte off Australia spinner Adam Zampa saw him walking back to the pavilion.

Despite hitting the ball firmly down the ground, Virat saw Agar grab a well-judged catch. However, just when the momentum was carrying the fielder outside the playing area, Agar was aware enough to throw the ball back to Starc who had run to his left from long-on.

Coming in to bat at his usual batting position of No. 3, Kohli scored his 56th ODI half-century amidst a 103-run second-wicket partnership alongside opening batsman Shikhar Dhawan who was dismissed by Kane Richardson n 96 in the 29th over. While Kohli scored 78 (76) with the help of six fours, it was Dhawan who provided India with yet another foundation on the back of his 29th ODI half-century with the help of 13 fours and a six.

Despite individual half-centuries from Dhawan and Kohli, it was wicket-keeper batsman KL Rahul’s 80 (52) with the help of six fours and three sixes which powered the hosts to 340/6 in 50 overs. He made two crucial partnerships, first of 78 runs with Kohli for the 4th wicket then of 58 runs for the sixth wicket.

With bowling figures of 10-0-50-3, Zampa was the pick of the Australian spinners. Pacer Kane Richardson (10-0-73-2) was the only other Australian bowler to dismiss a batsman today.

Here is how Twitterati reacted to the catch:

Time for a new fielding stat. The assist. Stat-wise, Ashton Agar gets zero recognition for that catch with Mitchell Starc despite performing the most difficult part of the play. #INDvAUS

Zampa gets Kohli but all credit to the fielders. Brilliant from Agar and Starc. 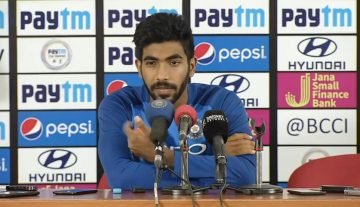