Currently, most loved IPL franchise Chennai Super Kings are locking horns with their northern counterpart Delhi Capitals (DC) at the Feroz Shah Kotla Stadium in Delhi. After winning the toss, the DC skipper, Shreyas Iyer decided to bat first on the sluggish surface where bowlers had all the fun in recent domestic and international games. However, they failed to do much with the bat barring Shikhar Dhawan and Rishabh Pant.

After having a sluggish start, Delhi was struggling at 79/2 at the end of 12 overs, then came Pant who made a decent partnership with Dhawan for the third wicket of 41 runs before being dismissed by Dwayne Bravo in the 16th over. He took two crucial wickets in that over as he also dismissed Colin Ingram in the same over. Because of that, Delhi only managed to reach a total of 147/6 in their quota of 20 overs.

WATCH – Dwayne Bravo Takes Two Crucial Wickets In An Over

During the chase, the visitors were cruising at 57/1 at the end of first six overs with Suresh Raina and Shane Watson going all guns blazing over the DC bowlers. Then came the 7th over of Amit Mishra in which out of the first four balls, Watson smashed two sixes, but in the penultimate ball of the over, Watson had to go back to the pavilion owing to the brilliance of Rishabh Pant behind the stumps.

On the second ball of the over, Watson came down the ground and launched the ball into the stands. He watched length ball from Mishra late then came out of the crease to make it a half-volley and thumped down the ground for a maximum. Again on the 4th ball. Mishra delivered a short ball and Watson clobbered it over deep midwicket.

Here are the videos of the sixes:

Now came the magical delivery as Mishra tossed the ball up enough to tempt the batsman, who attempted another fancy shot, but ended up getting his back leg out of the crease and Pant wasted no time in collectin g the ball and break the stumps, that too with some style. 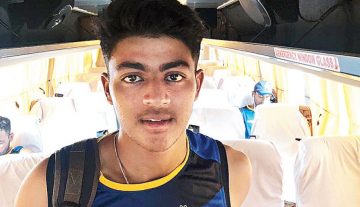