After losing the series opener in Visakhapatnam, Team India is looking forward to drawing the series in the final match at the M Chinnaswamy stadium in Bangalore against Australia. After winning the toss again, the Australian skipper, Aaron Finch decided to bowl first again with no changes in the squad. On the other hand, the Indian skipper, Virat Kohli revealed that the men in blue have made three changes as Rohit Sharma, Mayank Markande, and Umesh Yadav made way for Shikhar Dhawan, Vijay Shankar, and Siddharth Kaul. Dhawan and KL Rahul opened the innings for India.

India was having a slow start as they were at 24/0 after the first four overs, but, happened in the next two overs was nothing less than entertaining for the Indian crown in Bangalore. Things started with a top-edged six over the fine leg boundary on the fourth ball of the 5th over. However, it was the penultimate ball of the over which took the attention of the crowd. Jhye Richardson was bowling the over and he delivered a full ball wide outside off, and Rahul lifted into the stands as he came forward before confidently a with the help of an extended cover drive, he cleared the boundary with ease.

In the next over bowled by Pat Cummins, Rahul went berserk again. On the fourth ball of the over again, KL pulled off a mind-boggling shot as the ball was full on middle, right near his toes, but he was good enough to nonchalantly flick it over deep midwicket. It was a clear display of bottom-hand technique from the batsman.

On the very next ball, Rahul again smashed for a six with the help of a pull shot over backward square. He was almost expecting that delivery given the last full ball went for six. He stayed on the back foot and met the ball near his chest, and hooks a shot for another half-a-dozen.

Here is the video of the shots: 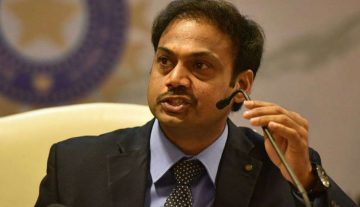