Despite the fact that the former Kiwi skipper Brendon McCullum has retired from international cricket but he still remains one of the most athletic cricketers in the world. He is currently captaining the Brisbane Heat side in Big Bash League (BBL) 2017-18. A video of McCullum chasing the ball to the boundary line was one of the highlights of the T20 game.

On the second ball of the 5th over of Thunders’ innings, Jos Buttler smashed a good length delivery from Josh Lalor over the fielders in the offside. McCullum rushed towards the boundary to save a few runs for his team. He knew that the ball is going to slow down due to wet outfield and he managed to get there in time and scooped the ball in inches away from the ropes saving one run for his team.

The crowd cheered in unison for his electrifying effort at the boundary. Here is the video:

That is an incredible effort in the deep from Baz McCullum! https://t.co/tXCzU73ANi #BBL07 pic.twitter.com/34HXzwuYjD

While his fielding was brilliant, McCullum failed to replicate the same with the bat as he managed just 5 runs while chasing a challenging total of 150 in a rain-affected 17 overs game per side. 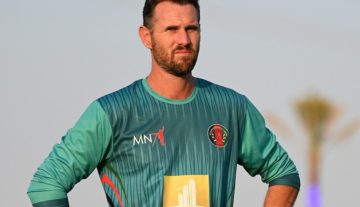