The 11th edition of the Indian Premier League (IPL) going on and on Monday, ahead of the match between Kings XI Punjab (KXIP) and Royal Challengers Bangalore (RCB), the veterans Ashish Nehra and Yuvraj Singh were seen dancing on the field of the stadium in Indore and it was a treat for fans.

The two veteran cricketers have been idols for young and aspiring cricketers in the country. To see them together in such a fun-loving mood has been the talking point ahead of the IPL match. It was a must-win clash for both the teams, but to start the match in such good spirits must have been refreshing for the fans at the ground.

Nehra, known for his jokes, was seen matching Yuvraj step-for-step. It seems the bond is still strong. Here is the video of the veterans dancing together:

And how can one probably keep the self-proclaimed ‘Universe Boss’ Chris Gayle out of action when one is talking about dance. It goes without saying that he danced as well! That really got the Indore crowd going as he is an ex-RCB player. Watch Gayle enthrall the crowd with his dance.

Meanwhile, KXIP needed a win in that match in order to make sure that they make their way towards the playoffs a bit easy, whereas RCB couldn’t afford to lose a game at this stage in order to keep their playoffs hopes alive.

However, the match turned out to be a one-sided affair as Punjab team were bundled out for a meager score of 88 and RCB chased down the target with all of their wickets intact and almost 12 overs to spare. Virat Kohli led the chase for the visitors as he scored 48* and made sure that his team chases down the total without any hiccup. 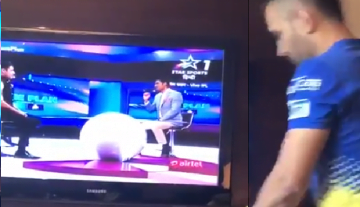