Australia has outplayed India in all the three departments without even breaking much of a sweat in the first of the three-match ODI series to take a 1-0 lead at the Wankhede Stadium in Mumbai. Their bowlers were simply fantastic before the Aussie openers, David Warner and skipper Aaron Finch scoring centuries during the chase. The visitors have begun their short tour to India with a thumping 10-wicket win which left the men in blue with a lot of questions to which they need to find teh answers to as soon as possible.

During the match, a kite flew down to the Wankhede stadium and the game was halted for some time in the first innings. After the match, Warner went on to articulate the incident when the match was stopped before the 50th over of India’s innings. In the post-match press conference, Warner said that he told Jasprit Bumrah, who snapped the kite, that it belongs to some poor kid.

The Australian opener said, “Well it is the kite festival. I heard so it’s very bizarre, it got caught on Spidercam and I thought it was a little bit dangerous and Bumrah decided to come out and just snap it and I said “that’s some poor kid’s kite,” but yes it was very bizarre, very bizarre.”

In the match, Australia captain Aaron Finch won the toss and invited India to bat in the series opener. Rohit Sharma, who was rested for the T20I series against Sri Lanka, failed to provide a good start as he was dismissed by Pat Cummins for 10.

KL Rahul and Shikhar Dhawan stitched a 121-run partnership for the second wicket, but nothing went India’s way after Rahul’s dismissal in the 28th over and all hell broke loose for the hosts. Team India suffered a huge collapse as they lost their last nine wickets for just 121 runs.

With only 255 runs on the board, India needed some quick wickets, both Finch and Warner didn’t give any chance to the opposition and played their shots fearlessly. Australia completed the chase in the 38th over of the innings and won the match by 10 wickets. 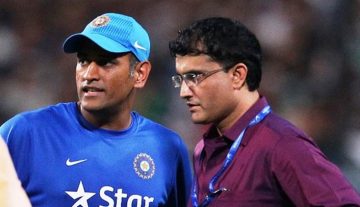