Team India is currently locking horns with their arch-rivals in the ongoing Asia Cup in the third game of the super four stage. However, the eighth over of the match bowled by Yuzvendra Chahal became interesting as the Pakistani opener Imam-ul-Haq was dismissed LBW on the last bowl of the over only because MS Dhoni gave the right suggestion to take the DRS to the Indian skipper Rohit Sharma.

Earlier, Pakistan skipper decided to bat first after winning the toss and revealed that they have made two changes in the squad as Mohammad Amir and Shadab Khan was back in place of Haris Sohail and Usman Khan. On the other hand, Rohit decided to go with the same XI.

Chahal bowled a full-length ball and drew the batsman forward and as a result of that, the ball found Imam’s front pad finds when he tried to flick the ball but only managed to flick his foot. However, appeal for leg before turned down by the umpire, but Rohit asks for the review immediately as suggested by Mahi.

The ball was nicely flighted outside off and the batsman came forward to play across the line, the ball spun past the inside edge, enough to hit the top of middle and leg as shown in the review. Here is the video of the dismissal: 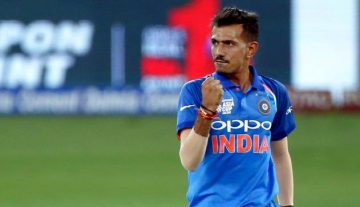