The Mumbai Indians (MI) are hosting Kolkata night Riders (KKR) in the last league match of the ongoing season of the Indian Premier League (IPL) at the iconic Wankhede Stadium. After winning the toss, the MI skipper, Rohit Sharma asked the visitors to bat first and his decision backfired as Chris Lynn came out all guns blazing.

Lynn along with Shubman Gill gave a decent start to the visitors as they added as many as 49 runs in the powerplay itself, but on the first ball of the 7th over Hardik Pandya dismissed Gill. In his next over, Hardik dismissed Lynn as well and after that KKR witnessed a decent dip in their scoring rate as from 57/2 after the 9th over, they were standing at 65/2 after the 12th over. However, the real magic happened in the 13th over of Lasith Malinga as he dismissed Karthik and Andre Russell in a matter of three balls. More importantly, Russell was dismissed for a golden duck.

WATCH – Malinga Dismisses Karthik And Russell In The Same Over

After those dismissals, KKR never managed to come back in the game as Nitish Rana played some shots but it was sufficient as he was also perished in the 18th over of Malinga. Eventually, Kolkata reached a total of 133/7 in their quota of 20 overs.

During the chase, the MI openers, Quinton de Kock and Rohit Sharma came out all guns blazing as in the fourth over the innings bowled by Russell, as they smashed 21 runs with the help of couples of fours and sixes. However, on the very first ball after the powerplay, De Kock lost his wicket owing to a brilliant catch by Karthik. Krishna delivered a short ball at the middle stump and in an attempt to play the pull shot, Quinton smashed it in the air and Karthik ran backward and stretches to his right to hold on to the catch. 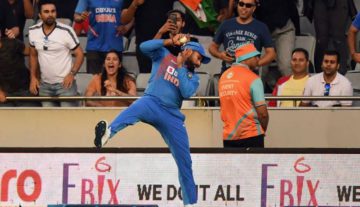