There is no doubt regarding the fact that the CSK skipper, MS Dhoni is one of the biggest crowd pullers when it comes to the Indian Premier League (IPL). The three-time IPL winning skipper has been one of the poster boys of the tournament. Ever since he was bought by the Chennai based franchise in the very first IPL auction back in 2008.

Since then Dhoni has led the Chennai based team into the playoffs in all the 9 seasons of the T20 extravaganza. The Chennai Super Kings has also featured in the finals of the tournament the most times and along with IPL, Dhoni has also won the now-defunct Champions League T20 tournament twice, in 2010 and 2014, while leading CSK.

Recently, there has been a sudden rise in the popularity of Dhoni as the fans have started realizing that the former Indian skipper, has reached the twilight of his career. In recent times, more often than not fans have been breaching the ground security to meet their idol and touch his feet or shake his hands.

However, Dhoni has also started having some fun with the fans, often making them work for the handshake, by having them chase him on the ground. Such instance was seen during the second ODI between Australia and India, which saw Mahi being chased by a fan who wanted to hug him.

Due to Dhoni’s massive fan following, most of the stadiums in India witness full house for the CSK team even away from home. On Tuesday night, Chennai traveled to Delhi to lock horns with the Delhi Capitals (DC) and won the match pretty easily, with Shane Watson’s 44 and MS Dhoni hitting a six to ensure the victory.

Two fans wearing the Chennai Super Kings color dodged the security personnel at the Feroz Shah Kotla stadium to reach to their idol and touched MS Dhoni’s feet. The first fan managed to meet his idol during the match. While the second one entered the ground after Dwayne Bravo hit the winning runs to take CSK home. MS acknowledged their gesture, as the fans reached the pitch to touch his feet before the security took them away. 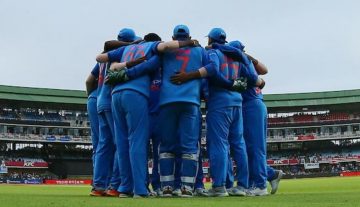