Australia all-rounder Glenn Maxwell is considered one of the best fielders in world cricket. Recently, he did the same during a game between Brisbane Heat and Melbourne Stars, where he grabbed a stunner with his left hand running behind while fielding at mid-on to remove Sam Heazlett for 9 as well.

Brisbane Heat scored 149/6 in the first innings and post a target of 150 for the opposition to chase down as well after winning the toss and opting to bat. Ben Duckett scored 51 runs for them and the team put up 149/6 while Adam Zampa and Glenn Maxwell claimed a couple of wickets each giving away 20 and 19 runs respectively.

However, in the 16th over of the innings, Sam Heazlett was facing Nathan Coulter-Nile and tried to lift the ball over mid-on. But he couldn’t hit it long and Glenn Maxwell, who was fielding at mid-on, ran behind and took a stunner with his left hand as well.

Extraordinary grab from Glenn Maxwell! One of the catches of the summer #BBL11 | BKT Golden Moment pic.twitter.com/01HmBs9VPK 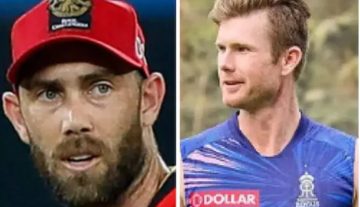 IPL 2022
By CricShots - Apr 24, 2022
Jimmy Neesham Took A Dig At Glen Maxwell Over His Comment On No-ball Controversy