In recent times, the Indian players, Shikhar Dhawan and Hardik Pandya have been missing a lot of action on the field due to injuries. While Dhawan injured his shoulder while fielding during an ODI against Australia in Bengaluru last month, Hardik made a futile attempt to return to the international set-up for India ‘A’ in New Zealand recently after his back surgery.

Currently, both the ace cricketers are going through rehab at the National Cricket Academy (NCA) in Bengaluru, along with injured fast bowler, Ishant Sharma. On Thursday, the trio was seen undergoing the recovery proceedings but there was no sign that the players were finding it monotonous.

ALSO READ: RCB Goes Through A Logo Makeover And SRH Took A Dig At Them

One would suspect the trio must be going through some tough time when their team-mates are sweating it out in New Zealand but the reality was different as they were seen dancing to the tunes of a Bollywood classic during a traditional gym session.

While Dhawan and Hardik are still uncertain over their possible comebacks, Ishant could still play in the two-match Test series in New Zealand starting February 21. The lanky pacer suffered a Grade-3 tear on his right ankle while playing for Delhi in a Ranji Trophy match last month and is under observation ahead of the red-ball series. Ishant is India’s veteran fast bowler in Test cricket with 292 wickets under his belt.

Dhawan shared on his Instagram account a video of the dance at the NCA and he captioned it: “Who said rehab is boring??? Yahaan ke hum sikander”.

India has suffered a lot of injuries in recent times. Apart from him, the deputy skipper, Rohit Sharma suffered a calf injury while taking a quick run in the fifth T20I against the Black Caps in Mount Maunganui recently. The absence of the in-form batsman made India pay a price in the ODI series that followed the 20-over series and the Men in Blue lost it 0-3.

Another ace pacer Jasprit Bumrah also made his comeback to the Indian team in the home series against Sri Lanka but his form has not been the same, raising alarm. He failed to pick a single wicket in the three ODIs against the Kiwis besides going for a lot of runs. 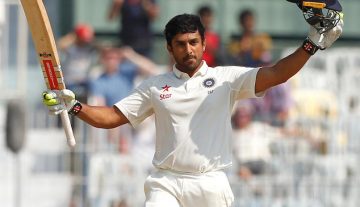 Article
By CricShots - Jul 11, 2017
5 Indian players who will be missed in Sri lanka tour