South Africa is currently fighting out in the second Test against India to avoid the follow-on and they are finding it difficult to get their grooves over the match as Indian bowlers have been over them in the game combined with a phenomenal double century by the Indian skipper, Virat Kohli. However, there came a moment during India’s batting on Day 2 when Ravindra Jadeja caught himself in a cheeky situation that ended up with a warning given to him by match umpire Chris Gaffaney.

Jadeja came out to bat after the dismissal Ajinkya Rahane gave his wicket to Proteas spinner Keshav Maharaj after scoring his 20th fifty in Tests. It was expected that Saha might come to bat but instead of Indian gloveman, the in-form all-rounder came out to bat.

Saurashtra all-rounder looked pretty decent when he came out to bat, but the umpires gave him a strong warning for running across the pitch in his quest to get a single on the 2nd delivery of 128th over bowled by Anrich Nortje.

Actually, Jadeja played a delivery bowled by Nortje with soft hands and shouted for a single but Kohli who was at the non-striker’s end declined it and the striker was left in a position to dance. In order to maintain his body balance and avoid falling on the pitch, Jadeja took two big leaps over the pitch that looked a bit funny but after this incident umpire warned the Indian batsman.

As per the rules, after an umpire gives a warning signal to the batsman for running over the wicket, then the repetition of the same mistake from the batting side in the same innings means the team will have to face a penalty and five runs will automatically be added to the opposition’s score.

The Indian skipper looks in top form during the first innings of the match on Day-2 as he went onto register his 7th double century in his international career and also broke the record of former Indian opener Virender Sehwag for scoring the quickest 1000 runs against South Africa, and visitors have already lost 7 wickets and with still trailing by more than 400 runs. 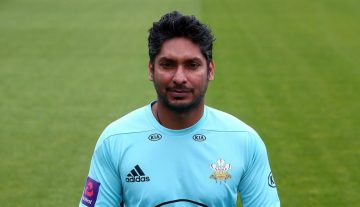