India and Australia will be locking horns with each other in the Border-Gavaskar series down under at the end of this year that will comprise of four Test matches. It’s one of the most awaited series for the fans all over the world, especially after Virat Kohli and his men defeated Tim Paine’s Kangaroos 2-1 to win their maiden Test series last time India toured Australia in 2018-19.

Despite the fact that the series is too far fetched, the mind games have begun. The hosts will be bolstered with the presence of  David Warner and Steve Smith as they made a strong comeback after one-year suspensions.

Australian fast bowler Josh Hazlewood threw the first verbal volley when he said that he wanted to Mankad India’s Cheteshwar Pujara when India and Australia meet later this year in the Test matches. Pujara was the highest run-scorer from either team as he went on to add 521 runs from 7 innings and averaged an astonishing 74.42 with the help of 3 tons and a half-century.

During the red carpet of the Cricket Australia Awards, Hazlewood said, “I have saved that (Mankad dismissal) for Pujara on the flat wicket of MCG.”

🗣 "I hope I don't find myself in that situation." – Meg Lanning

🗣 "I reckon I'll save that one for the next time … at Pujara." – Josh Hazlewood@gradecricketer chats with the Aussies about the Mankad 😅 pic.twitter.com/8pSpWSU8a6

Pujara took to Twitter and thanked Hazlewood for the prior warning and said that he will be prepared for the same. he wrote: “Thanks for the heads up Josh, I might have to include it in my preparation.” Pujara had scored 106 off 391 balls in a marathon inning of 481 minutes at the MCG in the 2018-19 series.

Thanks for the heads up Josh, I might have to include it in my preparation 😂😂😂 https://t.co/GILpI2dXUn

The controversial Mankading when R Ashwin dismissed England batsman Jos Buttler in a 2019 IPL match between Kings XI Punjab and Rajasthan Royals, it became the talk of the town then. Cricketing legends Dale Steyn, James Anderson, and Shane Warne have called the technique disgraceful and ungentlemanly. However, Mitchell Johnson, Murali Kartik, and Dean Jones have supported the mode of dismissal, saying that the updated laws make it perfectly legal and it’s the batsman who needs to be careful. 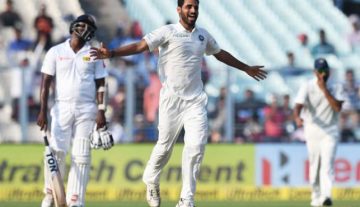 Article
By CricShots - Dec 4, 2017
India’s squad for The SA tour is announced