The Indian opener, KL Rahul has turned-out to become an asset for an Indian team in last month or so be it with the bat or behind the stumps, and on Sunday, again, he proved his worth as a keeper with a ‘Dhoni-esque’ effort to dismiss Tom Bruce. With that run-out, not only did he prove his worth but perhaps also cemented his spot as the wicket-keeper batsman in Team India.

Ever since the MS Dhoni has been on a sabbatical India has been looking at the wrong end of the barrel for a replacement as they opted for Rishabh Pant. On the other hand, it was Rahul who has lived up to the promise of replacing the former Indian skipper behind the wickets, emulating the standards set by Dhoni himself. After his impressive performance during the ODI series against Australia earlier in the year, he continued to showcase his skills in the T20I series against New Zealand.

From plucking catches in mid-air to getting lightning-quick stumpings, in this series, Rahul has definitely broadened his horizon  and has become a long-term option for the Indian team. In the fifth T20I, nothing changed for the team and the fans, when a diving Rahul pulled off an effort similar to Dhoni and Superman to dismiss Tom Bruce. This all was possible after Sanju Samson waited on the ball and unleashed a throw at the right end.

A rushing Rahul collected the ball cleanly and just needed to get to the stump to dismiss Bruce and dent the home side’s batting order. And that was clearly what Rahul did, as with a nice pick-up and an extraordinary dive, he broke the stumps to catch the Kiwi player short of his crease.

Here the video of the dismissal:

Here’s how people on Twitter reacted to the incident:

Tom Bruce gone. This wicket should go in the account of KL Rahul, who ran in speedily from behind the stumps to the stumps at  striker's end to run the batsman out.
Third wicket gone for NZ. #INDvsNZ

Opening, middle order, wicket keeping and now captaining the team India, KL Rahul has all the solution. Somebody please take his blood sample, it might be used to develop vaccination against #coronarovirus .#INDvsNZ

Kl Rahul is a champion 🖤 @klrahul11

If KL Rahul doesn't deserve Bharat Ratna, I don't knoe who does.

If anyone had any doubts about KL Rahul behind the stumps, that effort to dismiss Tom Bruce just puts any debate to rest.#INDvsNZt20 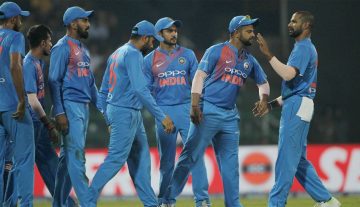