Currently, the Royal Challengers Bangalore (RCB) are locking horns with Kings XI Punjab (KXIP) in the ongoing season of the Indian Premier League (IPL) at the M Chinnaswamy Stadium in Bangalore. After winning the toss, the KXIP skipper, Ravichandran Ashwin asked the hosts to bat first and his decision cost him dearly as Bangalore smashed as many as 70 runs for the loss of a crucial wicket of their skipper Virat Kohli after the first six overs.

During the toss, the RCB skipper said that they have made two changes in their squad as Dale Steyn and Pawan Negi made way for Tim Southee and Washington Sundar. On the other hand, KXIP also made a couple of changes as Ankit Rajpoot and Nicholas Pooran came back to the squad in Harpreet Brar and Sam Curran.

Parthiv Patel started smashing the KXIP bowlers from the word go. However, RCB lost their skipper in the 4th over of Mohammed Shami and in the next over of Shami, it was almost like Parthiv took the revenge for the same as he smacked Shami for as many as 18 runs in the final over of the powerplay with the help of three fours and a six. However, in the 7th over itself, Patel was dismissed by Murugan Ashwin.

From 70/1 in the 6 overs, RCB came down to 81/4 at the end of the 9th over as Moeen Ali and Akshdeep Nath were dismissed by R Ashwin and Hardus Viljoen. However, then AB de Villiers and Marcus Stoinis decided to stay till the end. Both of them stuck in the middle and decided to go behind the bowlers in the last four overs when they smashed as many as 64 runs.

However, in the 19th over RCB smashed 21 runs off Shami as De Villiers smashed three consecutive sixes in that over and one of those went out of the ground. The next over of Viljoen was even bigger as they smashed 27 runs in that over with the help of three sixes and a couple of fours. This time Stoinis was the main hitter as he smashed two pairs of six followed by a four on the last fours balls of the over and ABD had started the over with a six. RCB reached a total of 202/4 in their quota of 20 overs. 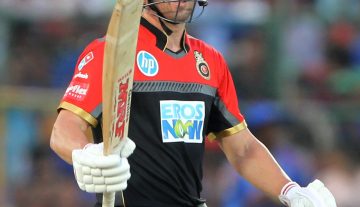