The Australian bowlers, Nathan Lyon and James Pattinson took a couple of excellent catches to dismiss New Zealand opener Tom Blundell and the all-rounder, Todd Astle. While Blundellwas dismissed for a meager score of 2 in the ongoing third Test of the three-match series at the Sydney Cricket Ground on Monday, Astle scored 17.

Blundell went for an expansive cover drive off Mitchell Starc’s bowling but couldn’t keep it down. Nathan Lyon, who was standing at the backward point position, managed to quickly dive down to his right and grabbed a stunner.

Here is the video of the stunner:

Can't keep the GOAT out of the action! 🐐 #AUSvNZ

Australia outplayed the visitors in the Sydney Test by 279 runs as they affected a 3-0 clean sweep over New Zealand. Lyon took a 10-wicket haul in the match which helped the hosts to easily win the final Tet. He went on to dismiss Jeet Rawal, Glenn Phillips, BJ Watling, Coleen de Grandhom, and Todd Astle in the second innings. Todd Astle’s brilliant catch was taken by Pattinson.

Astle wanted to get for a big shot, but he ended up hitting it high in the air and Pattinson ran close to the ball to grab the ball with a dive. Everyone was surprised to see this amazing catch. The batsman also couldn’t believe it. No one expected that Pattinson would catch the catch so brilliantly.

Marnus Labuschagne was given the Man of the Match award for outstanding performance as he played a brilliant knock of 215 runs in the first inning and scored 59 in second. Apart from him, David Warner also played unbeaten innings of 111 runs in this match.

Earlier, Australia set New Zealand 416 to win the third Test after declaring at 217-2 midway through the fourth day at the SCG. New Zealand got off to a horrendous start as they began their chase. Mitchell Starc sent both the openers quite early in the innings. Jeet Raval soon followed as he nicked one to Tim Paine off Nathan Lyon for 12. Debutant Glenn Phillips, who top-scored for the Kiwis in the first innings, didn’t trouble the scorers as Lyon got him in a similar fashion as Raval. 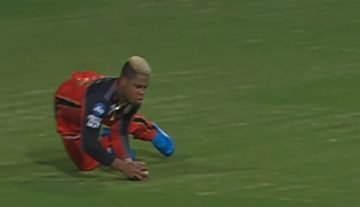