England’s Vitality T20 Blast has come to an end which already witnessed some beautiful performances so far in the tournament – be it batting, bowling or fielding. Recently, Michael Pepper came into the limelight as he scripted a brilliant relay catch while fielding near the boundary ropes and converted a possible six into a dismissal as well.

This happened during the game between Essex and Lancashire in the third quarter-final of the competition. Essex put up a total of 161/5 and the opposition chased down the target in 15.4 overs as well. While Michael Pepper scored 36 runs for Essex he was dismissed by a stumping from Phil Salt.

However, Pepper managed to get back at Salt with his stunning fielding effort to dismiss the batter. Matt Critchley was bowling the ninth over and Salt attempted to hit him over deep mid-wicket while batting 27 runs. Pepper was fielding at the position and jumped to take the catch as well. He got hold of the ball but lost his balance in the process. It looked like it will become a maximum with the ball in his hand but somehow he managed to throw it towards his teammate Ben Allison. Meanwhile, The fielding effort impressed commentators as well and they called it ‘sensational’.

Some absolute sauce from Pepper to remove Salt 🧂🌶 pic.twitter.com/rxsvgwnwf3 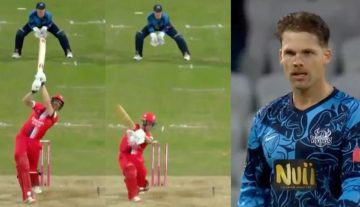