Friendships between teammates are very common in any sports team. While hugging, celebrating or any kind of friendship and affection display can often be seen on the field, recently something similar was seen during the game between Sydney Sixers and Adelaide Strikers at the Sydney Cricket Ground (SCG) on Tuesday in the ongoing Big Bash League (BBL). The incident happened when Adelaide Strikers’ veteran Australian speedster Peter Siddle gave a peck on the cheek of his teammate Daniel Worrall. 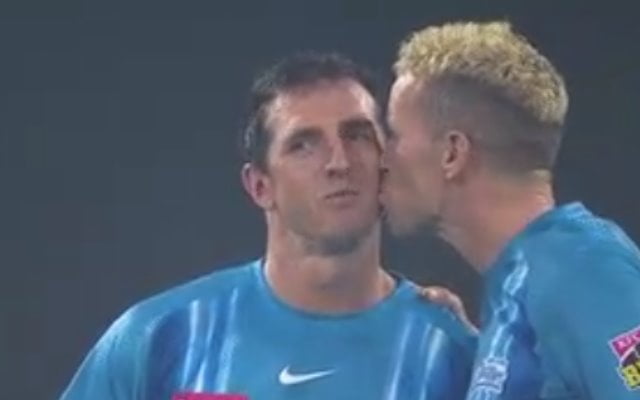 While the incident brought huge smiles to both their faces, it was aired live on television as well. Meanwhile, the commentators have also appreciated the kiss as it brought a much-needed relief during a nail-biting T20 match as well. And, the BBL’s social media account has given an apt caption while posting the video. The captioned it: “Love is in the air at the SCG.”

Love is in the air at the SCG… 😘@KFCAustralia #BBL11 pic.twitter.com/ikTMBabHHP

However, despite their affection on the field, Adelaide Strikers eventually lost the game by four wickets. Both Peter Siddle and Daniel Worrall failed to take a single wicket. While defending a total of 148 runs, Adelaide Strikers did try their best to put up a great show during their bowling but Jordan Silk’s quickfire knock of 36 runs off 24 balls proved quite costly to them as Sixers chased down the target with four balls in hand as well.

Earlier in the match, while batting first, Thomas Kelly had played a stunning knock of 41 runs that helped Strikers take the score past the 140-run mark. However, the total wasn’t enough as Strikers fell a few runs short and Sydney Sixers convincingly reached the target and sealed the deal.