A police officer, who was performing his duties at the Bellerive Oval, Hobart took a spectacular running catch during the 3rd ODI between Australia and South Africa on Sunday. Shaun Marsh slammed the delivery over the mid-wicket region for a huge six and officer Frank ran across to his left to grab the ball. He fell on the ground after taking the catch but managed to hold of it. In the entire game, there were a plethora of occasions when the crowd got the opportunity to take a catch.

Aiden Markram hit three while centurions Faf du Plessis (125) and David Miller (139) tonked two and four of them respectively. However, barring the Marsh one, none of the sixes were held by the crowd and all of them were grassed, ‘until old mate Frank stepped up to save the day!’. For his wonderful effort the officer received a standing ovation from the crowd.’

Talking to the Fox Sports reporter Neroli Meadows about the catch, Frank said, “I’ve seen a lot of catches dropped today and I thought, ‘I’m not dropping this one, whatever it takes,’ so I’ve gone down with the ball, torn my brand new pants but it’s worth it. It had a fair bit on it and it wasn’t slowing down. It got me around there (high on the chest), got my hands around it.”

Here is the video of the sixes and the catch:

CLASSIC! The local fans were having all sorts of catching problems today, until old mate Frank stepped up to save the day! Outstanding.#AUSvSA @bet365_aus pic.twitter.com/fRUmsmyLfb

Shaun Marsh scored 106 of 102 deliveries but still, the efforts from the other Australian batsmen were insufficient as the Kangaroos failed to save the match. Reflecting on his knock, Marsh said, “It was disappointing (to get out at a crucial stage)., Probably should have taken it a bit deeper. They batted really well in the last ten overs. It was good to score the hundred, but disappointed with the result.”

Marsh restored the Australian innings in a 107-run stand with Stoinis after Australia found itself in trouble at 3/39 in the 11th over. Here is Frank’s interview:

Frank the cop explaining that impressive catch to @Neroli_M_FOX 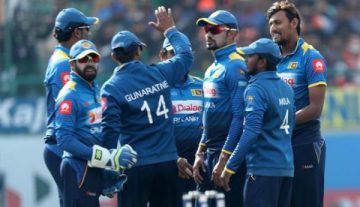 Article
By CricShots - Dec 12, 2017
Preview: Ind vs Sl (2nd ODI): Islanders Will Be Looking To Register A Series Win