However, the late fireworks of Kieron Pollard and De Kock helped MI to reach the total of 162/5 in 20 overs. In the final over of Khaleel Ahmed, Pollard lost his wicket owing to a brilliant catch by the young Abhishek Sharma.

During the chase, the SRH openers, Guptill and Wriddhiman Saha started off well as they scored as many as 40 runs for the opening wicket in just 4 overs before the latter getting out in the 4th over. However, just a ball before the dismissal a funny incident took place as when Saha thwacked the ball toward leg side, Pollard thundered after it, trying to kick the ball back into play but succeeding only in pushing it into the boundary rope. Worse still, his running momentum carried him over the boundary and into the advertising boards and he tumbled over it. However, later on, it was revealed that he was fine. 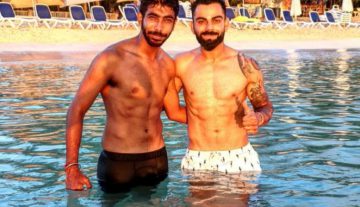 Social Shots
By CricShots - Nov 13, 2019
Twitter Thanks Jasprit Bumrah For Not Over Exposing